I forgot to add the giveaway for today. This is it. 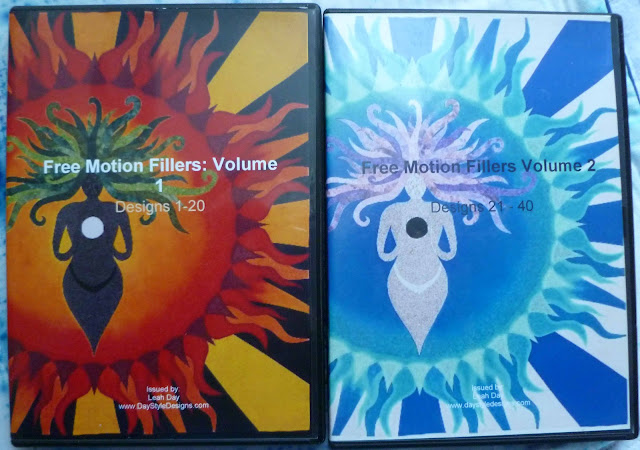 Leave a comment to win the last giveaway - the shibori fabric.


The day 7 giveaway winner is Christina

One of the best parts of having lots of people comment on my blog is getting to visit their blogs as well. I have met so many wonderful quilt artists from the Netherlands and one I just recently "met" is Ann Vanherle whose blog "Piece by Piece" is inspirational. While perusing her blog I came upon a post in which she talks about a stamp. She looked up the meaning of this stamp in a book. It is an Adinkra symbol from West Africa.
For some reason I was so intrigued with this stamp that I also did a bit of research on this symbol and this is what I found.

One of the website I checked out had this written about this symbol. "This African representation that nothing happens in life without the presence of God. There is nothing except God, omnipotent and omniscient. Always in one's life."
I like that. I decided to make my own Gye Nyame stamp using three different methods. I thought about carving it out of my E-Z Kut but since there really isn't any detail in the shape I decided to try 3 other materials: a sponge, a Styrofoam meat tray, and a homemade screen.

This is what happened 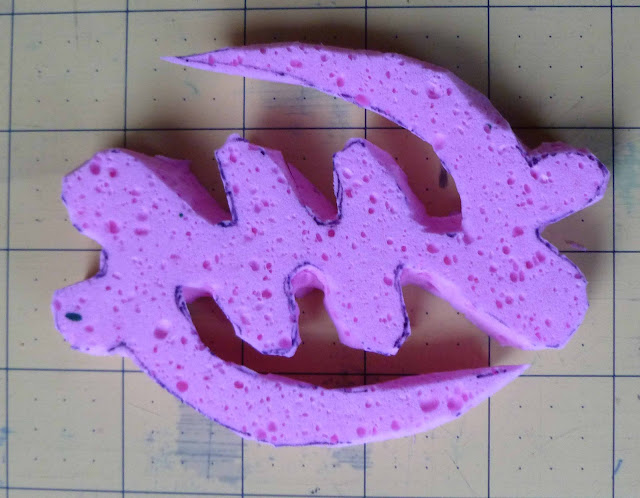 I bought this strange sponge at the dollar store. When dry, it is so HARD, you could drive nails with it. When wet it is very dense and doesn't work very well. Since I paid a dollar for it, I kept it and figured something would come up. I decided to reconstitute it in warm water which took a very long time. I wrung it out and used a fibertip to make the outline of the stamp which I had printed on copier paper and cut out. 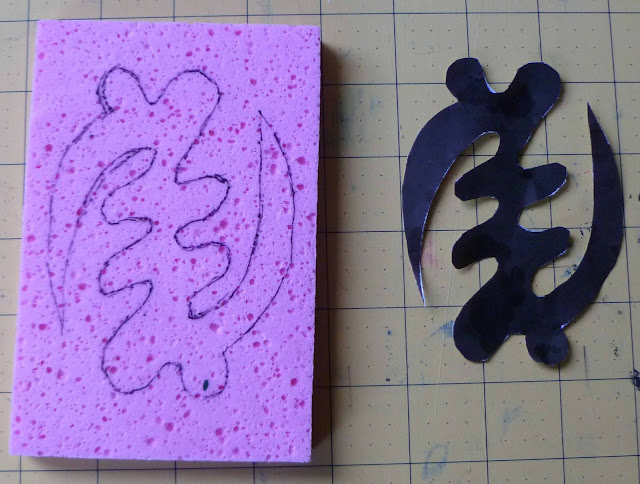 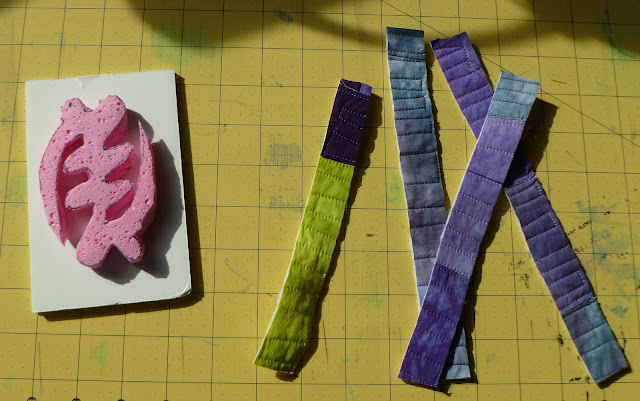 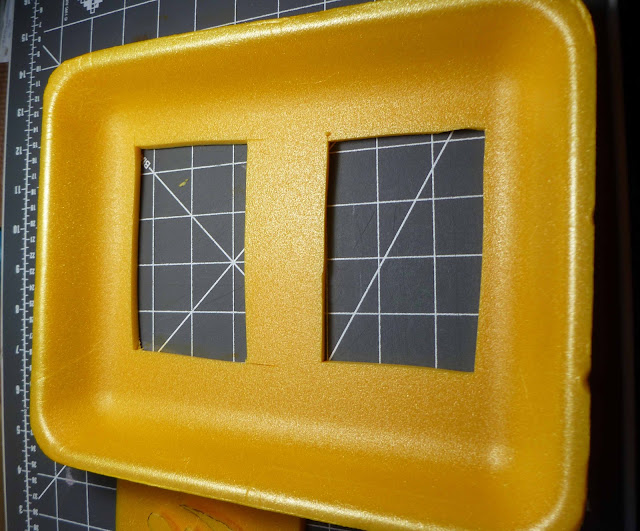 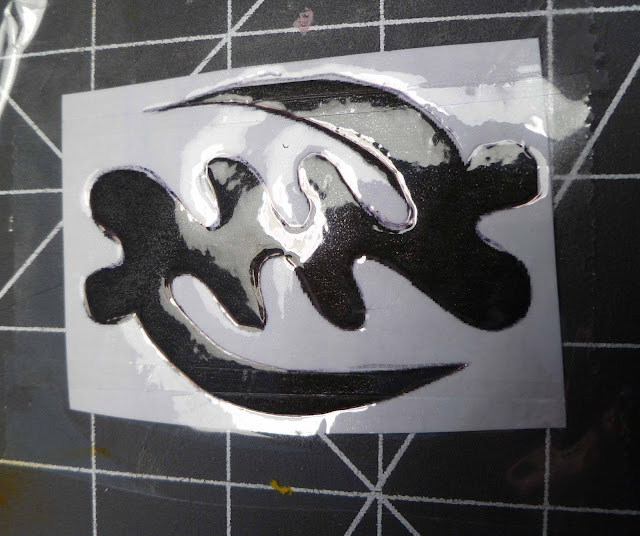 I used another smaller version of the stamp which I covered with tape to 1. adhere it to the foam and 2. protect the paper surface from tearing when I pressed the ballpoint pen into the image to make the indentation in the foam. You can see the grove I made. 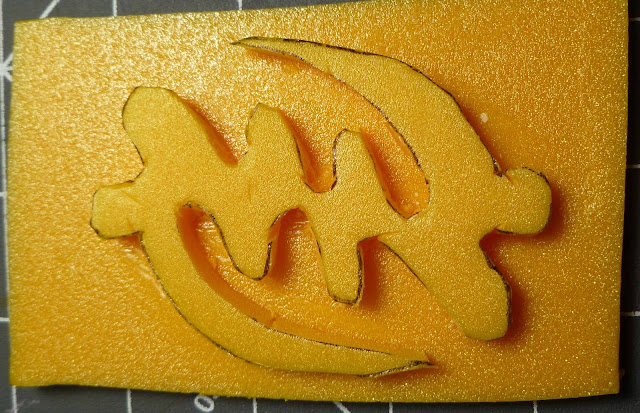 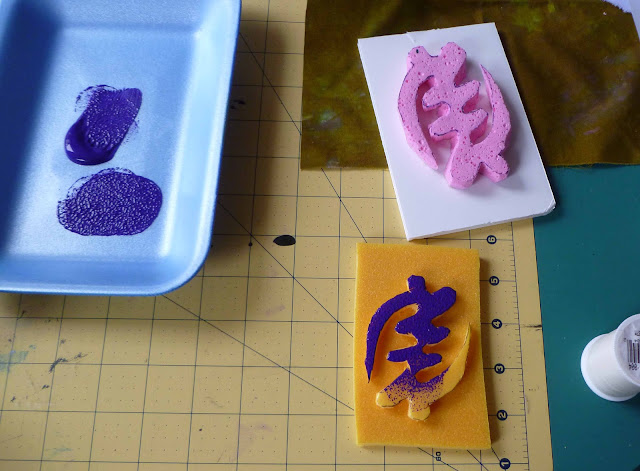 Here I am using the sponge pouncer (Walmart) with Violet ProFab fabric paint from ProChemical and Dye onto the Styrofoam stamp. The sponge stamp is drying. 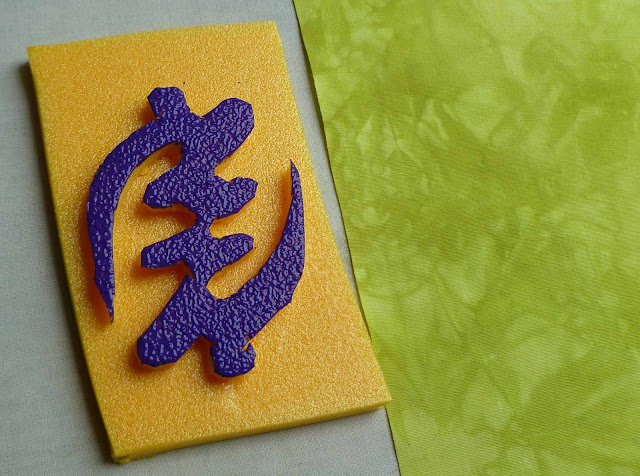 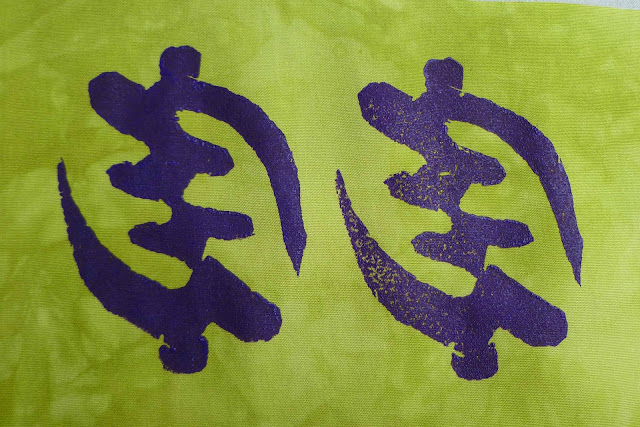 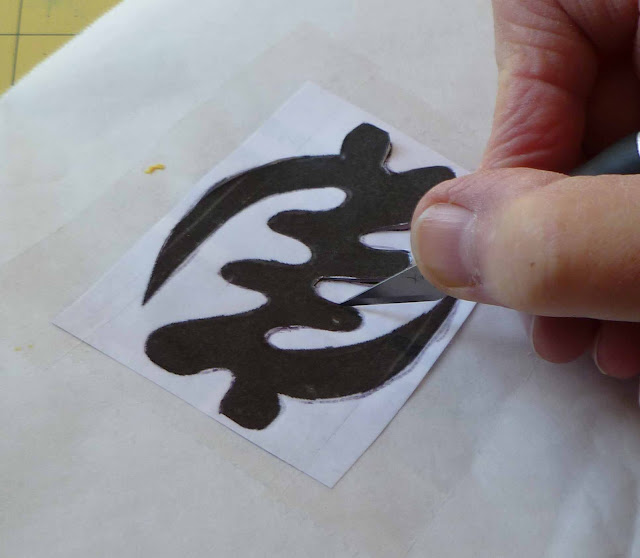 Next I took the image I had covered in tape and taped it to a piece of freezer paper and cut out the image with the X-acto knife. 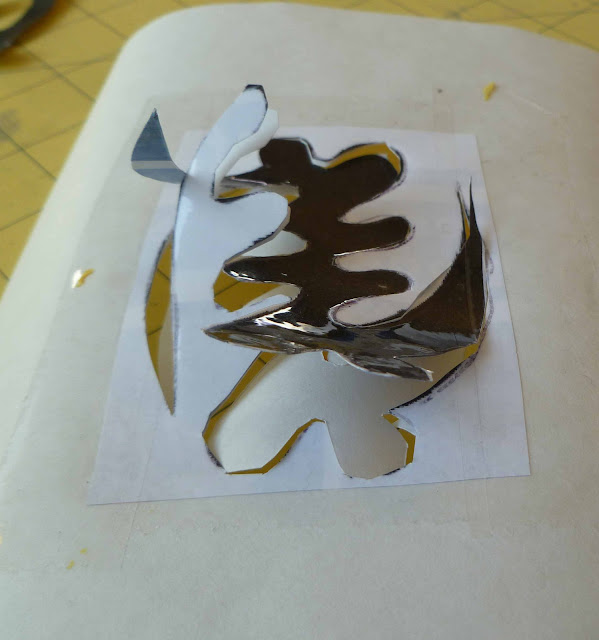 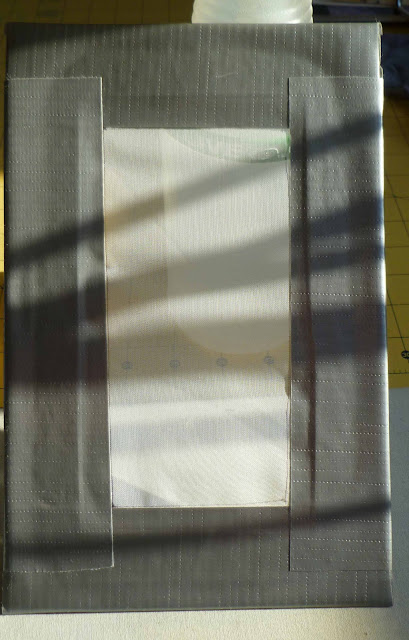 I made this screen by cutting a mat like frame from a piece of cardboard. I put down a piece of window sheer and taped it to the cardboard "frame" with duck tape creating a mini blank "silk screen". 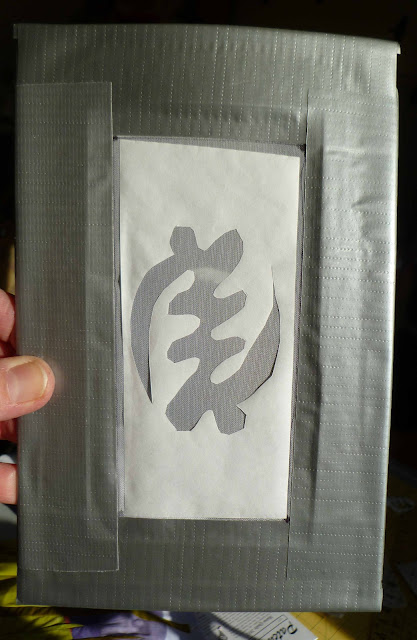 I ironed the freezer paper to the screen. I tried an iron but ended up using a mini-iron 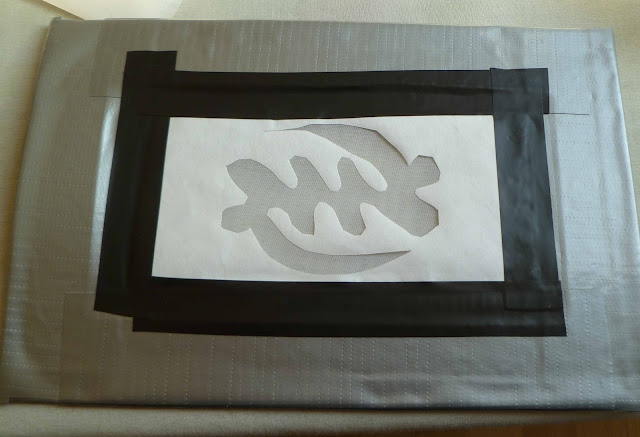 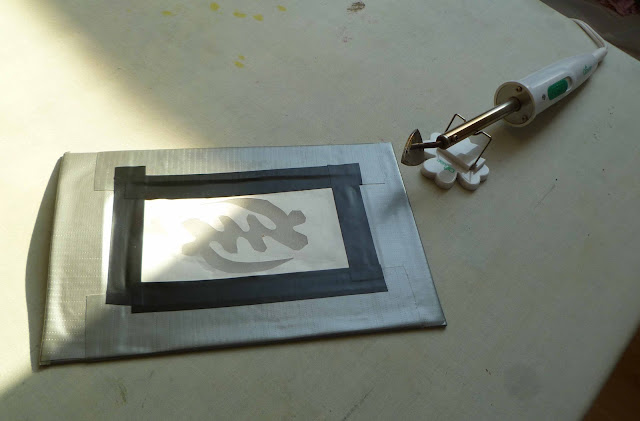 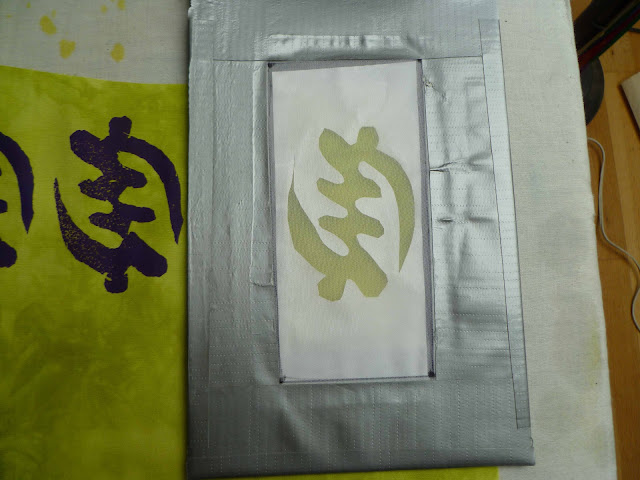 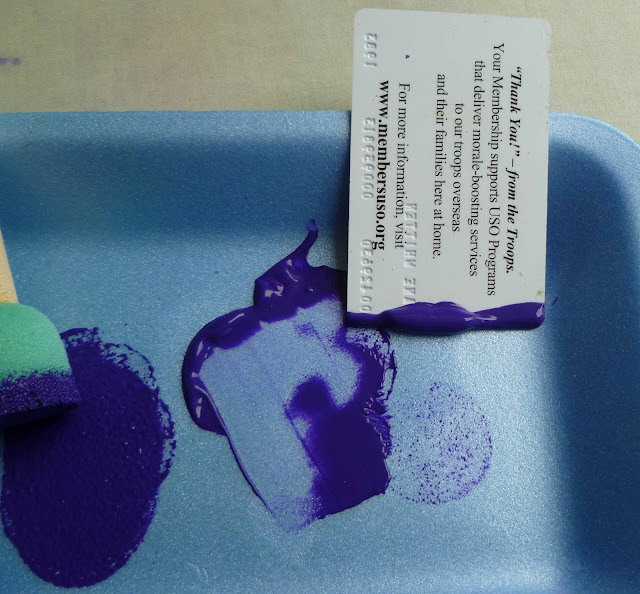 I loaded up a credit type card (hard plastic) and used it to screen the fabric paint over the screen. Screen side up; paper side down. 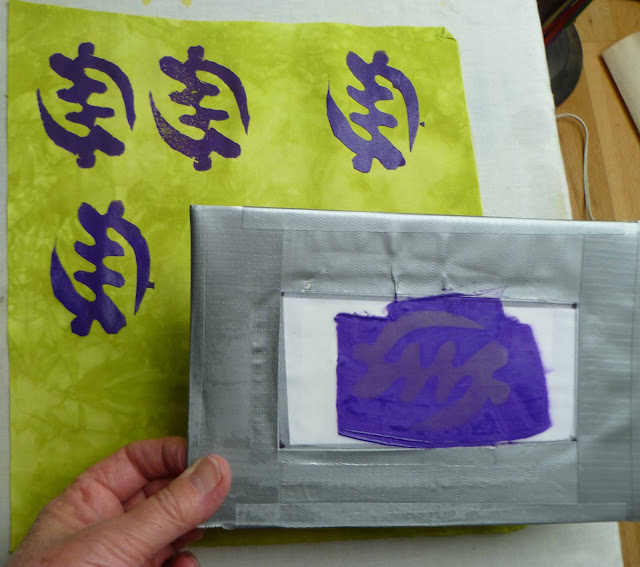 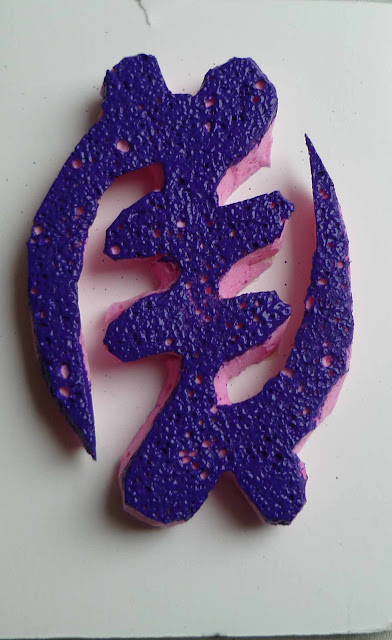 Now I used the pouncer to load the dried sponge 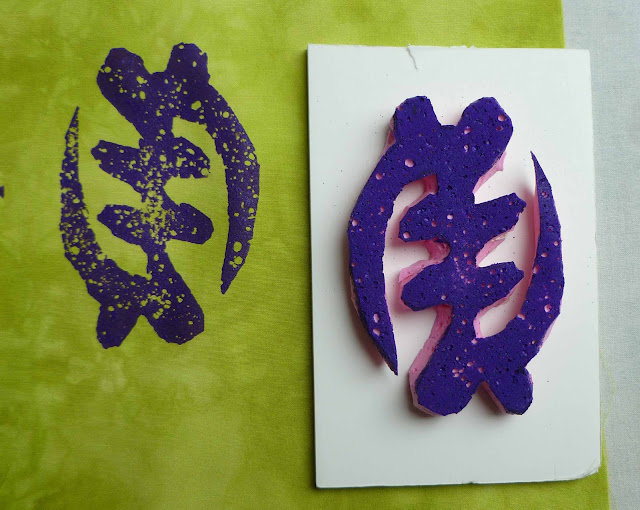 Not bad. Kind of organic and interesting 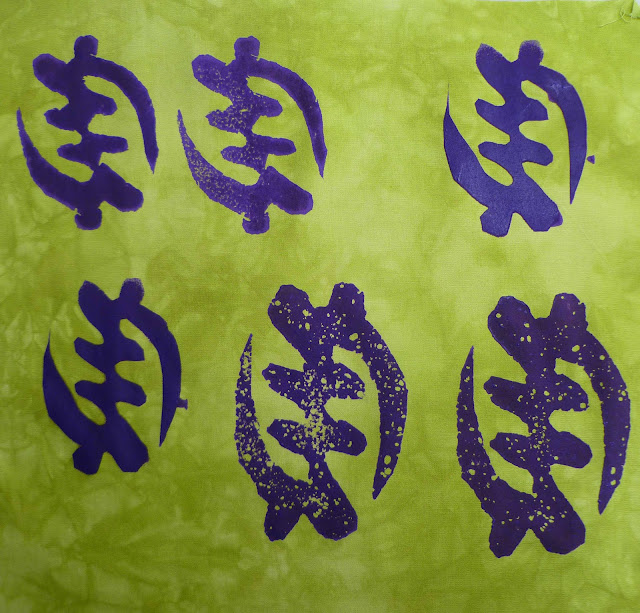 All of the printed images. The screen had a small tear in the paper - rats.

I don't think I've seen the last of this symbol. There were many other Adinkra symbols and I will be exploring them and their meanings.