This is the last (for today)
This past week Rosalita and I made fish prints. It seems in some Asian country when fish are caught, they are dried off and paint is applied then a piece of fabric is put on the fish and pressed with the hands leaving the impression of the fish on the fabric. Now you can buy rubber fish which have been cast from the real thing. This print was done of a bass and the paint was starting to dry out so I wet the fabric, not that good of an idea, and the print came out too 2 dimensional. I just received an order of metallic and variegated threads so I decided to experiment with green and light golden yellow metallic thread. I kind of punched up the outline of the fish a bit then used some YLI variegated blue/turquoise/lavender thread to quilt the background - my version of water. I call this a save. I zigzagged the boarder and I'm done for the day. I promise. 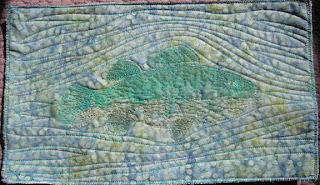 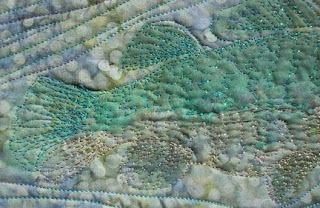 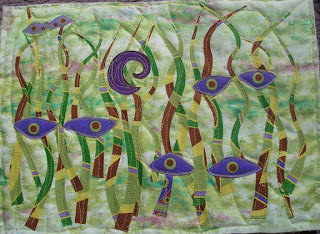 My new playmate, Rosalita, and I got together a few weeks ago and she challenged me with a small quilt project. The challenge was to make a small quilt with a certain fabric and a certain technique. The fabric was browns and greens and had butterflies, flowers and bees all over it. The technique was fusing. It was amazing to see how different our quilts came out. I fused a chunk of fabric that had no butterflies or bees on it and then cut thin strips and fused them on while I  curved the fabric under the iron. The strips fused on curvy. I then cut out parts of butterfly wings and made eyes out of them. I used the bees wings to make a tiny butterfly perched atop a grass frond. I called it "Spirits of the grass"

I have been working on a journal cover for my friend Nan. I wanted to use the theme of new beginnings or journey. While doing some research on symbols I found the Chinese characters that said "A journey of a thousand miles begins with the first step". I copied and pasted the symbols into a word document and printed it out. I then used Avery Note tabs to make a stencil of the words and stenciled it onto a two toned book cover I had sewn in Nan's favorite colors. The lighter fabric also had the symbol for journey in it and I also stenciled the spiral "journey" symbol onto the journal cover in two tones of gold metallic paint. I free motion quilted the dark fabric in gold metallic thread with the spiral in the center and the spokes of the sun radiating out from it. Lastly I attached some amber, gold metallic and orange beaded dangles (I couldn't help myself) to the front cover . I LOVE it and think Nan will too. 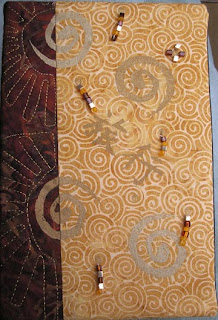 Some time this next week I will be making my second tutorial using "Avery Note Tabs" to make small stencils.
Posted by Beth at 9:33 AM No comments: 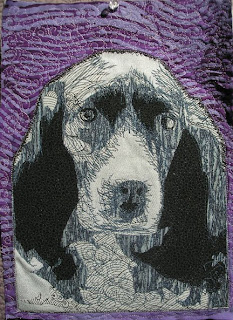 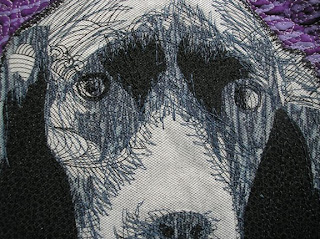 This 8 X 11 quilt was made with fused fabric covered in black tulle then thread painted.
Posted by Beth at 8:48 PM 2 comments: 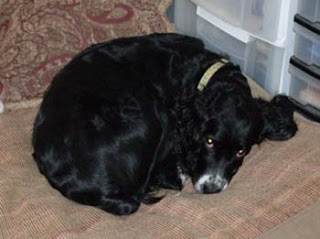 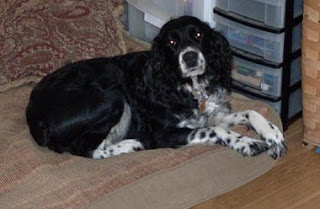 It's been seven years since Beryl, the doggie love of my life, died. I didn't think I would ever survive her death but the injuries she suffered after a fall down my basements steps onto the cement floor took the choice of life or death out of my hands.
I first saw her when she was 5 weeks old. I stepped into a pen of 12 roiling springer puppies. 11 were killing each other and she sat at my feet just looking up at me as though I was the lifeline to her survival. I picked her up and she nuzzled into my neck. I was a goner.
I visited her every day the pups were in their outdoor arena. The day she turned 8 weeks, I swooped her up into my arms and she stayed there, burrowing into my heart until the dark day I laid on a rug next to her while the chemicals took her away from me.
I had Aidan, my big  male Springer, but there would never be another dog like Beryl. Brian and I got into Springer rescue and we fostered dogs, pulled them terrified from shelters, found them homes and adopted 4 of them ourselves. They were all seniors who no one wanted; they found a home with us.
After our last, sweet little Jack, died I knew I couldn't bear getting another old one when we found Niamh. She was about 5 when we got her from the Waterville shelter 1 1/2 years ago. A Poodle is not a Springer and she was probably the hardest case we ever had - not housebroken, explosive diahrea for 3 month and terrified of her own shadow. She remains a fear pee-er to this day.
This past week I received an email from my Springer friend, Donna. It was a mass mailing to anyone who might be able to take a Springer girl; her dog Molly's full sister although not a litter mate. We emailed with the couple who needed to find a home for her and arranged to open our house to her.
The couple came with heavy hearts, having made one of the toughest decisions they had had to make. The minute I saw this diminutive black and white sweetheart, I hoped it would work out for us and her.
Gabby (Gabriela) has been with us only 3 days but has totally won us over. Her wiggly butt and gentle kisses have warmed our hearts and endeared her to us already. She literally bows to Aidan like he is some arcane canine God but keeps her distance from Niamh, the whirling dervish. Best of all she has become my shadow and the brightest warmest little doggie spot in my life in a long time.
No dog can take another dogs place because dogs like people are individuals. But I'm lovin' this little Springer girl.

The crow feather quilt is done and up 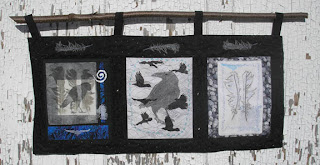 I have just finished the crow feather quilt I have been working on. I photographed it hanging on nails on the barn door.
I want to talk a bit about the techniques I used on each of the panels. Most of the techniques I used I learned from viewed Lyric Kinard's DVD "Surface design sampler platter" 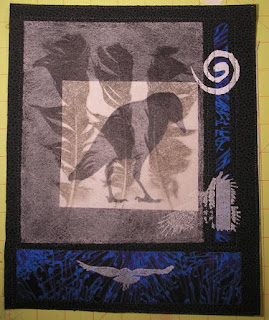 This panel was started with a solvent transfer. The crow image in the center was first copied on a copier which used carbon based toner. .I darkened the image using a black fabric paint pen. transferred the image to a piece of plain muslin, untreated, using Citra-Solve. I then used Heat n Bond on the back of the image to fuse the image onto the black background. Then I scanned three crow feathers I had been keeping tucked in the sun visor of my car for a few years. I printed the image on a used dryer sheet that was ironed on to freezer paper. I stitched the dryer sheet on top of the crow image and used two crow stamps I hand carved (see last tutorial for directions). Then a stenciled on the spiral shape using a stencil I cut from an Avery Note tab. The paint was latex pearl white metallic ( their name for it) This process will be covered in my next tutorial being posted in a few weeks. 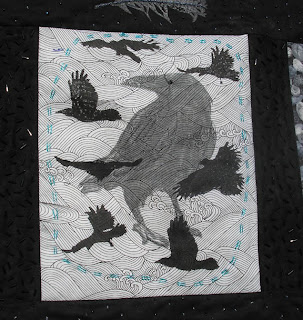 This panel was done using a solvent transfer like in the first panel. I then stamped crow images I hand carved using ordinary latex craft paint. I double hand-stitched around the image suggesting air currents which ravens glide on. The thread was a heavy turquoise metallic. 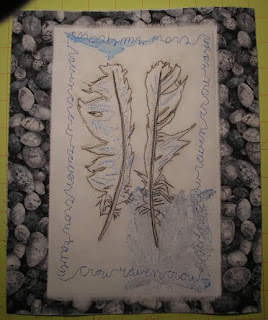 This photo was taken before the quilt was assembled but looks better than the outdoor shot. For this panel I used a light table to trace the images of two of the feathers onto untreated muslin. I used a permanent fine point Micron pen. Then I free motion stitched over the ink lines and did some free motion details inside the feather with turquoise tinsel thread from Coats and Clark called Glitz. It was a dream to sew with. I then used ink to stamp a commercial stamp with feathers on it in the lower right corner and ink stamped one of my crow stamps on the upper left. Probably won't do that again. 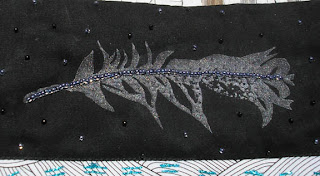 For the top boarder of the quilt, I laid out a strip of black fabric after attaching the three panels with 3" strips. I eye balled where the centers of the panels would fall on the top boarder and stamped my feather stamp using light silver metallic latex craft paint. I later hand beaded the shafts of the three feathers with a unique black bead that is black and coated with clear glass giving it that unique metallic look.

I stitched the panels and boarders together with batting (warm n natural) and black backing and hand beaded all the boarders. On the upright boarders I used glossy black bugle beads in the "Chicken Scratch" pattern. and the upper and lower boarders were done with random gloss black and the black crystal beads I used on the feathers. 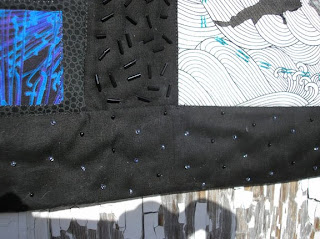 This is the quilt hanging in very poor light in my foyer. I decided to use black fabric tabs to suspend the quilt from a tree branch. I think the crows and ravens would approve. 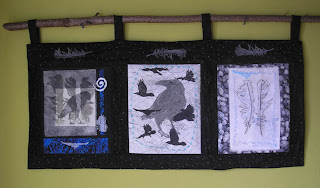