Today Rosalita and I got together to batik. We tried PFD fabric that had been soda soaked and dried on the line. The tjanting tools (all sizes) didn't transfer enough hot wax to penetrate the cotton fabric. We now think tjanting tools are for silk or other thin fabrics. I ended up using a paint brush to paint the hot wax onto the cotton. I used a strip of yellow cotton I had painted with ProFab fabric paints. I blotched wax onto the yellow, my least favorite color, and used thickened dye in black to over dye it. I also painted this hand onto a piece of fabric I had parfait dyed while at the ProChemical dyeing class taught by Vicki Jensen (see my favorite blogs).
It came out great. We found that running the fabric under cold water and scrumbling it between your hands helped get some of the wax off prior to ironing between paper towels. We had fun. 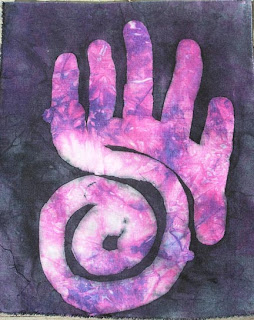 a bunch of stuff 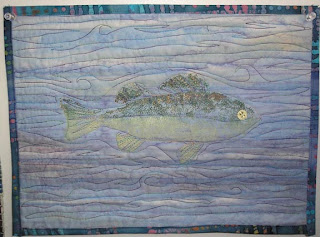 Above is a print of a bass and below a trout.  Both cotton with metallic and cotton free motion quilting. It's too bad you can't actually see the cool quilting on the trout because I stitched in turbulence as well as rocks on the bottom. 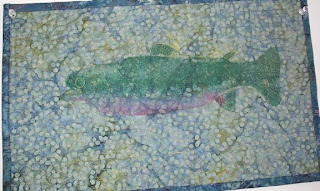 This is a hand painted Hercules beetle. 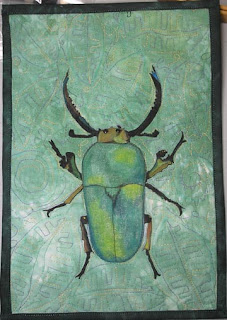 Free motion leaves as well as a spiral and Aztec sun. 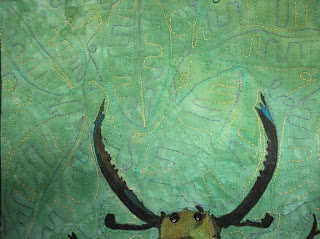 Cotton stitched in a shibori resist 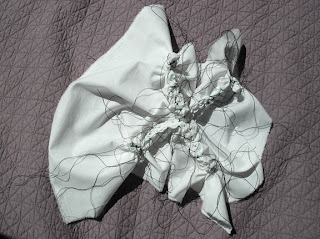 Cotton Shibori after dyeing. Note to self. Don't use low water immersion on shibori in the future! 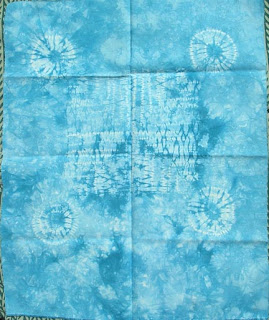 A quilt four years from start to finish. It's called "the messenger". 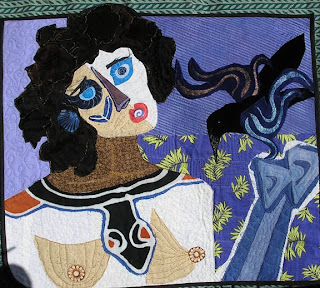 I just started a new website (don't ask) and I had to write something on the home page - some incredibly wise, deeply philosophic comment on art and life. I came up with nada. So this is what I wrote and it seems to be my "lesson of the year". I am not really sure about why I want a website and that is good since most of my life I have been sure and found I was mistaken.
Truer words have not been spoken by me! I lived my life SURE and have found repeatedly that I was mistaken. This brings me to my Tuesday dyeing experience. I decided I wanted to do a gradation dyeing of blacks and purple to blues and blues to greens. First, I followed directions sort of. I forgot the amounts of dye were for half yards and I was doing fat quarters. Then I decided to just use basically double dye and get "vivid" colors. Well, after the meeting this morning, I came home to "open my presents" Everything looked black EXCEPT the blacks and they looked dull purply black. I'm SURE I've just wasted 5 yards of PFD fabric for nothing. I threw them in the front loader with synthrapol and HOT water and took my parents to the podiatrist in Bangor. When I got back I put the poor "rags" in the dryer. When I took them out I noticed the blue I mixed with the green for that gradation was much weaker than the green which kind of took over. I was SURE this was a TOTAL waste of time. I trudged up the stairs clutching the "gone wrong" fabrics in my claw and then started to iron. I guess I was mistaken AGAIN! Thank you Universe. Look what I ended up with. 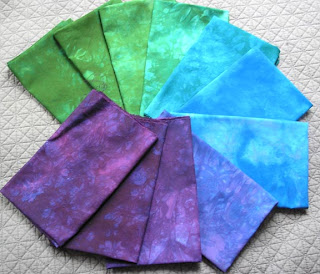 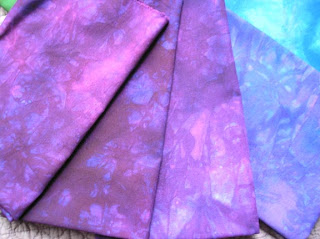 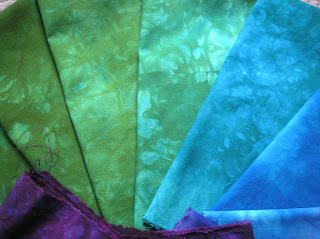 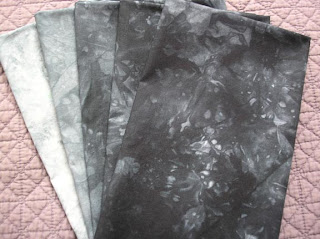 I used the "left over" dye on this huge full yard. 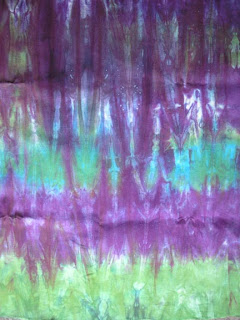 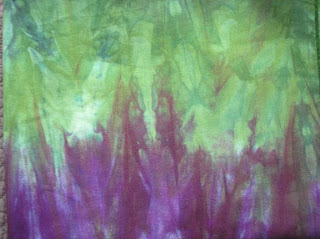 And this was a "clean up rag". 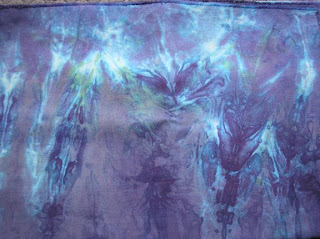 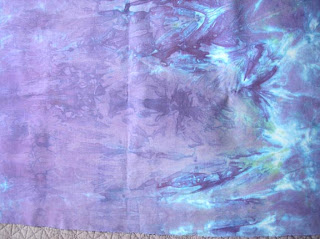 When will I learn that I am usually mistaken about being sure?
Posted by Beth at 5:34 PM 2 comments:

Part of the journey


I'm not sure whether I like this or not. I had a dream and in the dream I was looking at this quilt so I got up and made it. The silk just didn't want to cooperate with me and the differences in the values of blue are not exactly what I was going for.
It is done in all hand dyed fabrics, even the scrim on the "sun". It's 18 X 22 and has an unfinished edge which I like. I didn't dye the pearl cotton of the "waves". The Japanese characters say, "Fine weather, clearing up".
The jury is still out. 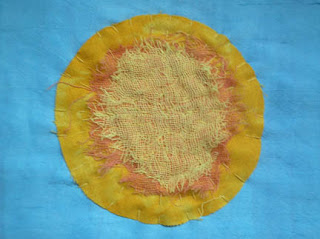 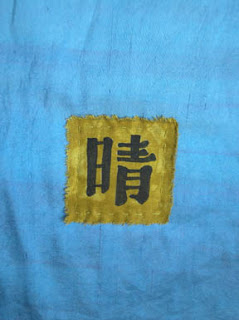 The Wicked Witch is dead!

Ding Dong! The Witch is dead. Which old Witch? The Wicked Witch!
Ding Dong! The Wicked Witch is dead.
Wake up - sleepy head, rub your eyes, get out of bed.
Wake up, the Wicked Witch is dead. She's gone where the goblins go,
Below - below - below. Yo-ho, let's open up and sing and ring the bells out.
Ding Dong' the merry-oh, sing it high, sing it low.
Let them know
The Wicked Witch is dead!
The day we moved into the house, I backed the moving truck in the driveway and the tree raked the entire length of the truck and scratched the bejezus out of it. I trimmed the tree frequently and it seemed the more I trimmed it the more the branches drooped, catching in my hair and scratching my face every time I walked under it. You might be wondering why I kept walking under it...the tree stood beside the path from our front door to the driveway; the only way out of the house. By the time I had literally sawed my way half way up the trunk, it dawned on me this was getting personal. This was war.
This spring branches dropped attacking the stop sign and knocking it over. I vowed to get even and was told because of the trees position along the road and power lines and the fact that the no longer used phone lines ran trough the branches that the removal of the tree would cost thousands. After another winter being gouged by branches, I told myself if I had to take out a loan this tree needed to DIE.
I called two arborists (hit men) and got prices for having the tree dispatched. Last week I gladly handed over the loot and watched the tree being limbed to death. Now please remember I have both a BS and MS in Environmental Science and Policy; a real tree lover but enough was enough. As the arborist cut the branches they caught and hung twisting around his arms and he couldn't get them to the ground. The tree was now fighting HIM. I remarked about it after the deed was done and he said he couldn't believe how those branches fought him!
Well, I won. The witch is dead! 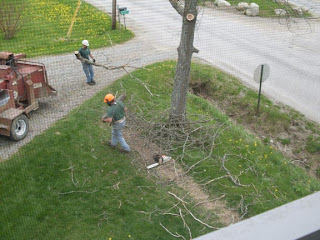 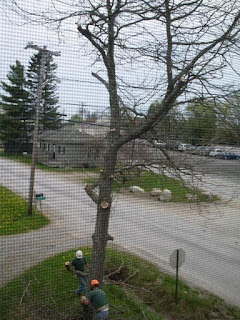 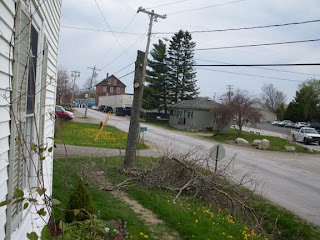 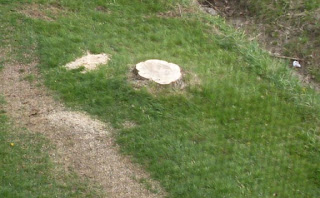 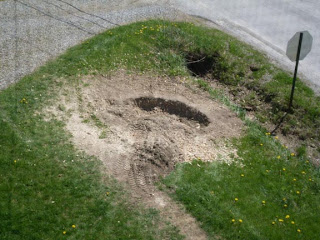