I think you might really enjoy this story. A year or two ago I bought the new Janome 1100 Horizon. The blogs and Yahoo groups were all atwitter about this great new machine for quilters. I contacted my buddy Tony at Tony's Sewing Machines and when I found he had it, bought one. The back story is that I have a Brother Innov'is 4000 which threads itself (yeah, with the touch of a button), cuts it's thread and stops the machine before the bobbin runs out with a message on the computer screen (I'm not kidding) so this "great" new Janome was a real snore.
I decided to put it on ebay for $1800. which is almost half the new price of $3000. People started emailing me will "offers" of $1500. and worse. I was so incensed about this that I pulled it off ebay.
ANYWAY I got an email from a woman asking me what happened to the machine. It just disappeared. I told her the story about how the machine was such a snore and she commented on the built-in walking foot. Well, I've used walking feet - those huge contraptions that clatter like a threshing machine and have to be screwed on - so I said  "What built in walking foot". I actually checked out the owners booklet and found the thing which is tucked up behind the machine. I followed the directions, got it into place and tried it. It purred like a kitten. VERY long story short, I kept the machine and use it for straight quilting (no free motion) although it does do that too. I use the Brother which threads itself. The machine is still a snore but I love that walking foot.
Back to the lady. We started emailing and getting to know one another and she had never made a quilt. I sent her my first edition of Eleanor Burn's "Quilts in a Day." She was also active in dog rescue and I had a book of 50 animal gifts (like dog coats and cat toy) which I sent her since she made items to sell for her rescue group.
She lived in Iowa (not sure where that was except in the middle somewhere) THEN Brian's (my partner) son moved to Cedar Rapids to become the president of a college. Brian was going to visit. I emailed Kris to see where she lived - in Cedar Rapids. So I decided to make her a sample of the Quilt As You Got (QAYG). It was just two blocks which I made with the flip and sew method from the tutorial (link above) with one connector strip. I know that I love having something in my hand to look at, examine and touch when making something. The photos and step by step process in the tutorial are very clear and easy to understand but a sample is great too. 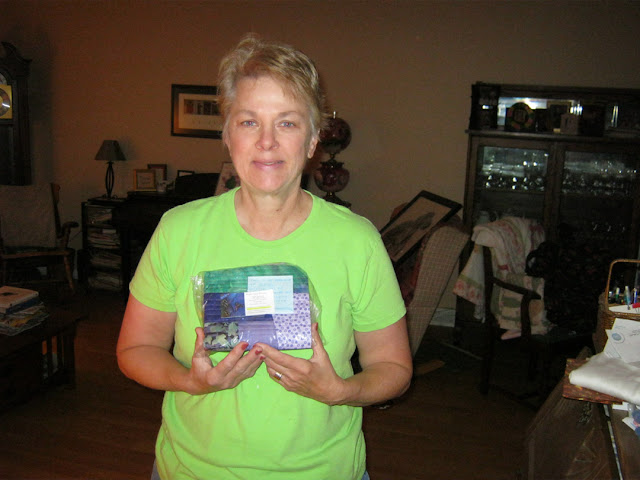 Brian took Kris's photo and she said I could post it. The bag has the two 12" blocks and a connector strip. She will start working on this quilt which is so great because you can use up your scraps and make a block or two if you want to spend a hour sewing then just pop them in a pile till you have enough for a project (anything from a baby quilt to a king). The tutorial is a queen and I think I made it in two or three (full) days.
Thanks Kris for being a good sport and loving dogs enough to aid in their rescue.


AND NOW THE GIVEAWAY FOR TODAY 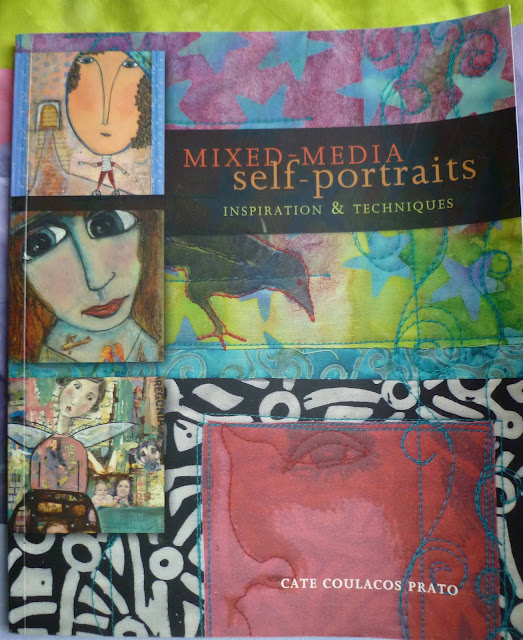 Leave a comment to enter the drawing
Posted by Beth at 5:52 AM