More on Judith and my playdate

I am hoping Judith will write a bit about this technique in her blog and show finished pictures of her work. Meanwhile I will tell you what I did. First off I took NO process pictures (smart). Well, we were just playing.

Available at Walmart and I'm sorry to say I know no other place to buy it. 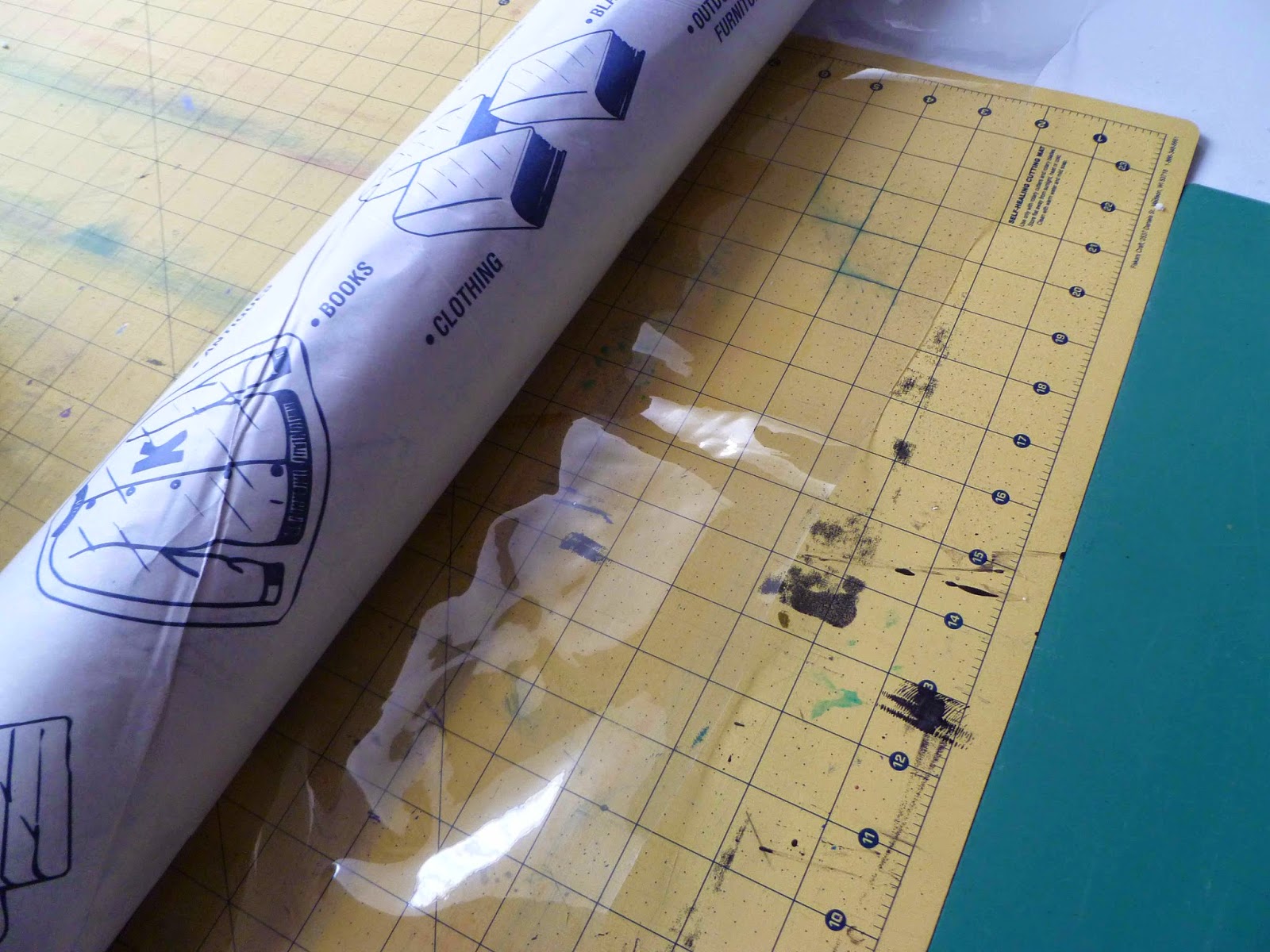 Folds will show up on the finished product so be smart and keep it rolled when not in use.

Judith was extra smart and opened bin bags and laid them on top before she laid out her fabric so she could easily remove the fabric from the table when she was done. I didn't but will next time.

I drew a design on the cotton with charcoal then mixed up my dye. I made a bit over a quart of thick SH print paste. I used about a 1/3 cup in a yogurt cup for each color. I just put a bit (maybe a 1/2T) of MX dye powder on the end of a plastic knife then used the knife to mix the dye into the print paste. We used credit cards to apply the dye. It was easy and uses less dye plus it makes "accidental" marks on the fabric from going over the same place twice. You can see the yellow and black. 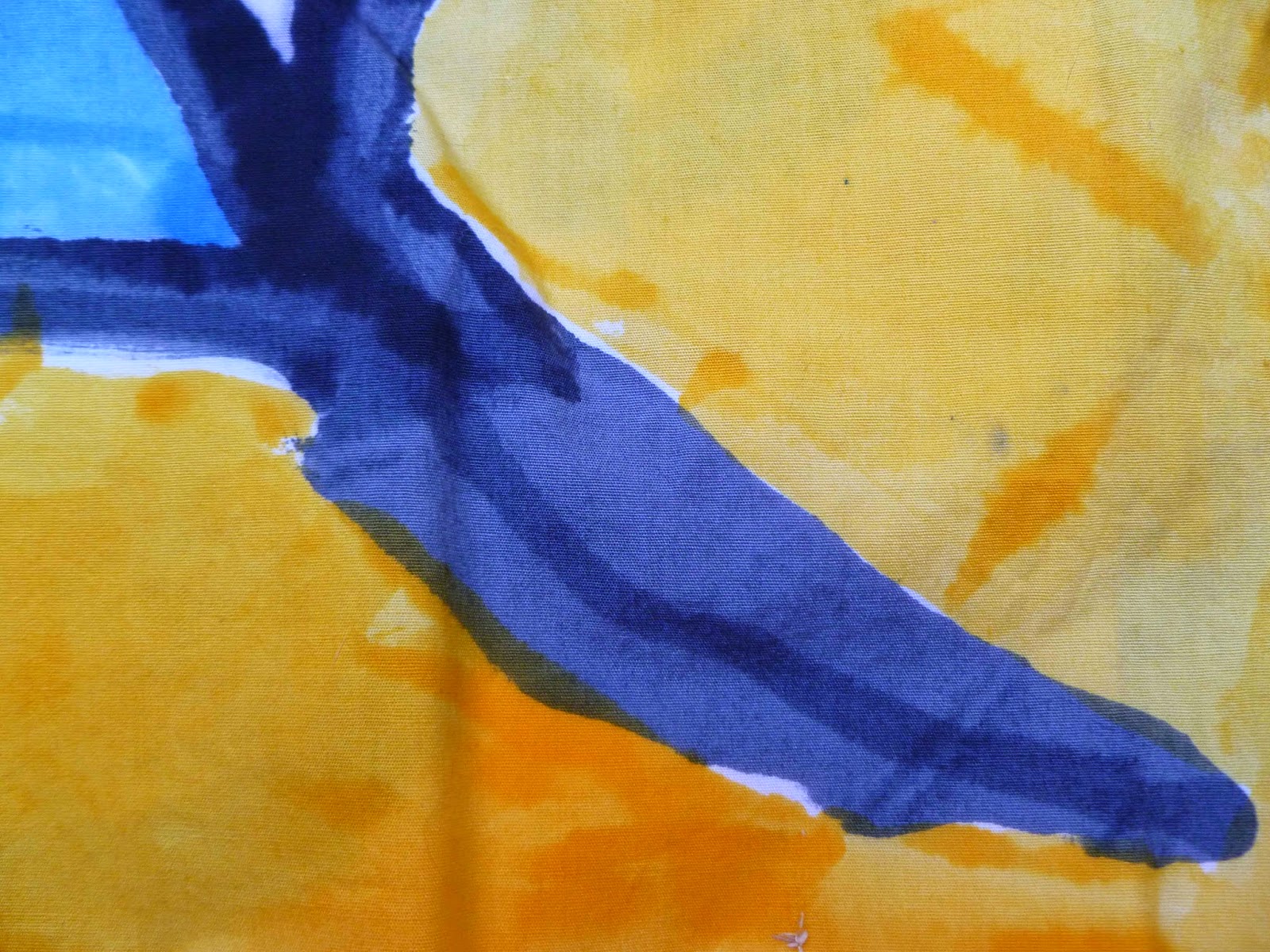 Also when you lift the credit card it can leave a line of dye which darkens. 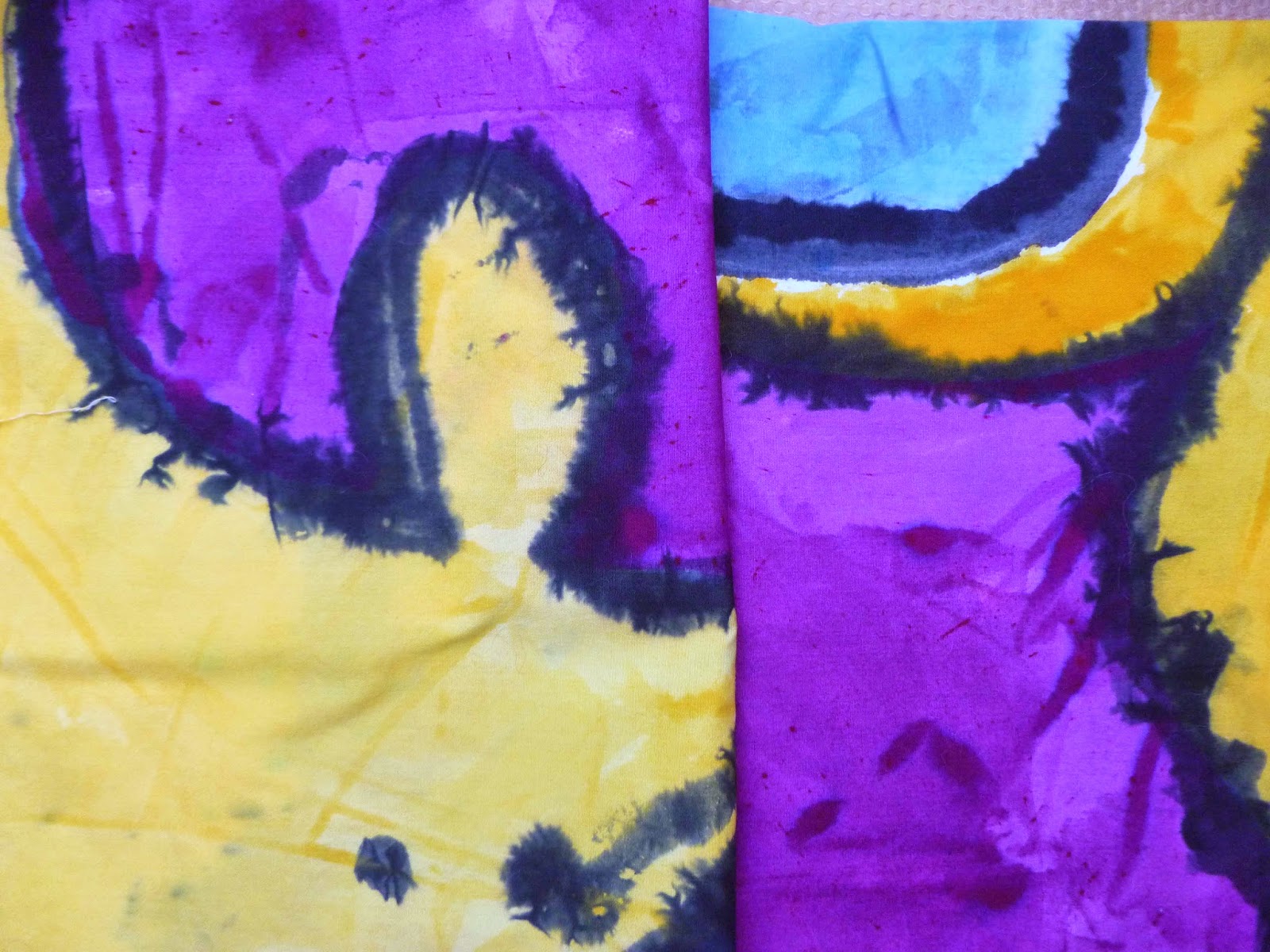 I drew my organic shapes with charcoal then started by laying down a line of back on the charcoal lines which I thought I would mash into the fabric with the credit card but the line of dye from a fine tipped bottle was so thick it just smeared. Yuck! I ended up using a brush. I only had outlined two of the shapes so I tried a different technique on the rest of the piece. The blue shape in the above two photos were the shapes onto which I brushed the black line. I used a credit card and filled in the shapes with color. I tried to stay away from the black outline on the first two shapes but the dye was thick and some ended up blending with the color 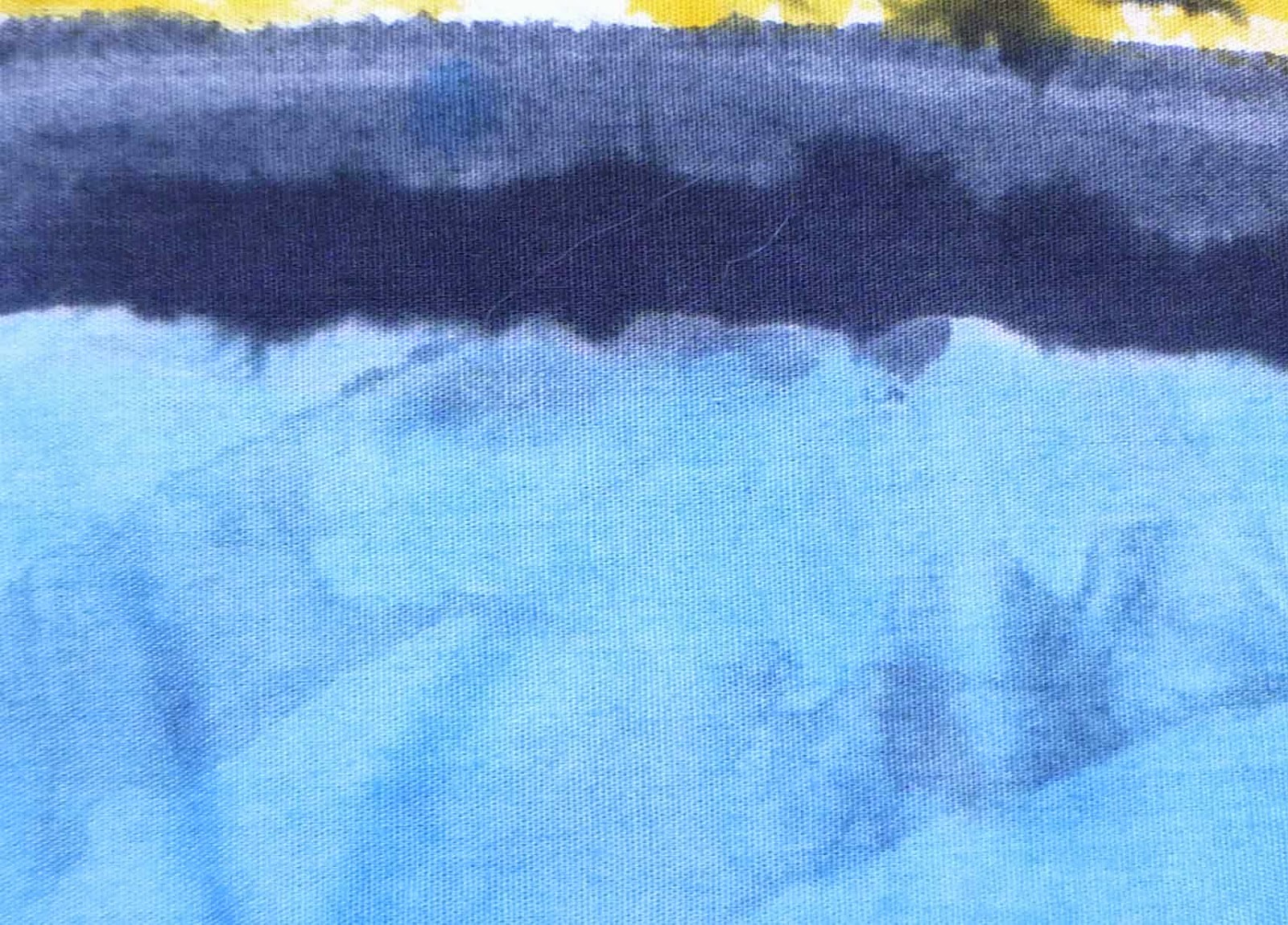 Not too bad. When all the shapes were colored I used the fine tipped bottle to outline the rest of the shapes. I waited till it looked like it had "sunk in" the fabric. There was SO MUCH print paste and so much dye on the fabric that I had no idea what would happen. I covered it with plastic, folded it up and threw it on the porch to batch.

What happened was the shapes that I outlined in black at the end wicked out and branched. It was unintentional but looked kind of cool. On the first two shapes I brushed the black onto, I tried very hard not to let the color touch the black so I ended up with a bit of white between the black and the color.

In the end, I ended up with two very different effects; one outlined and the other wild and branched. Now you know how to do both. 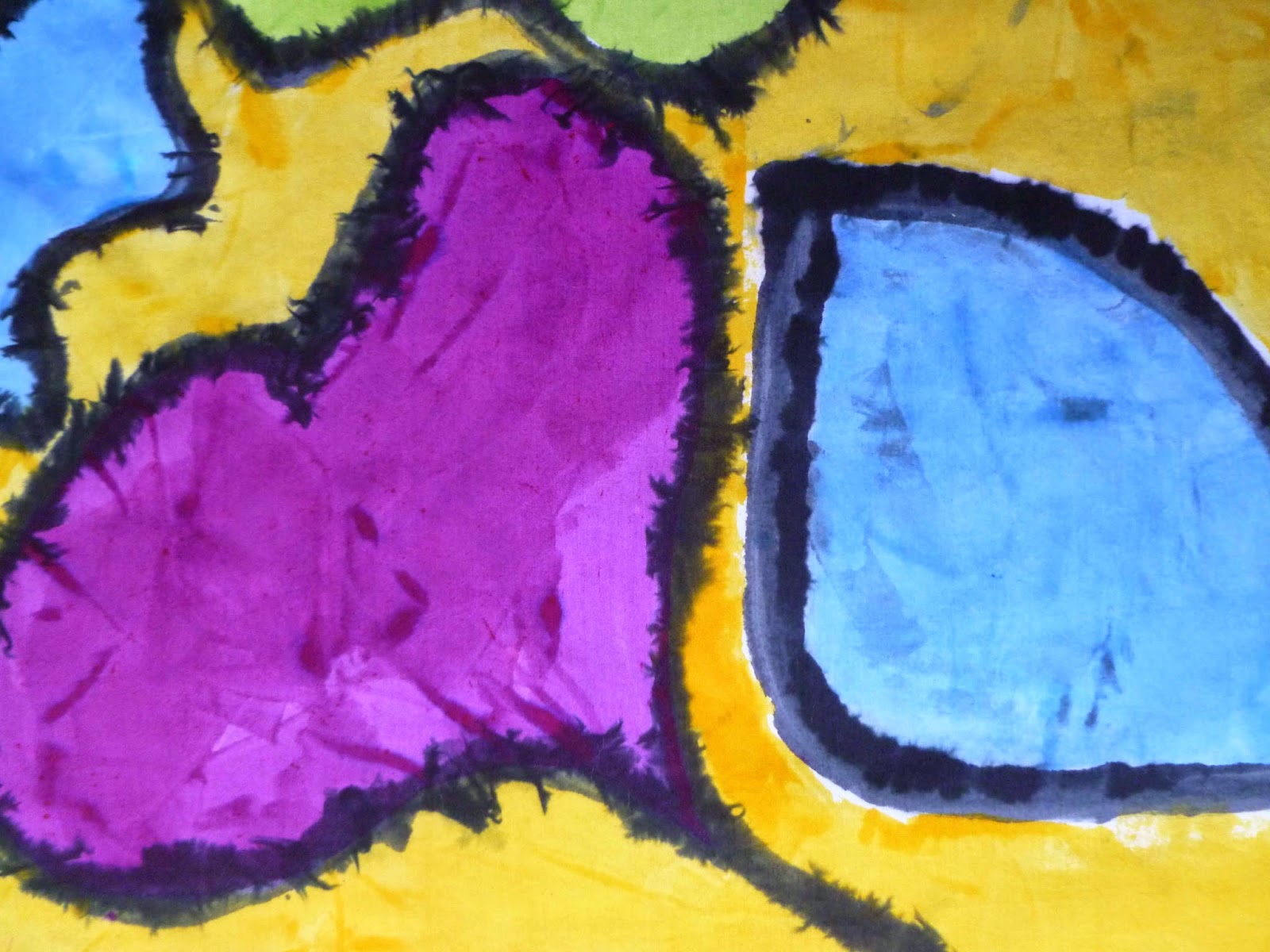 You can really see the difference here with the blue shape and purple shape. 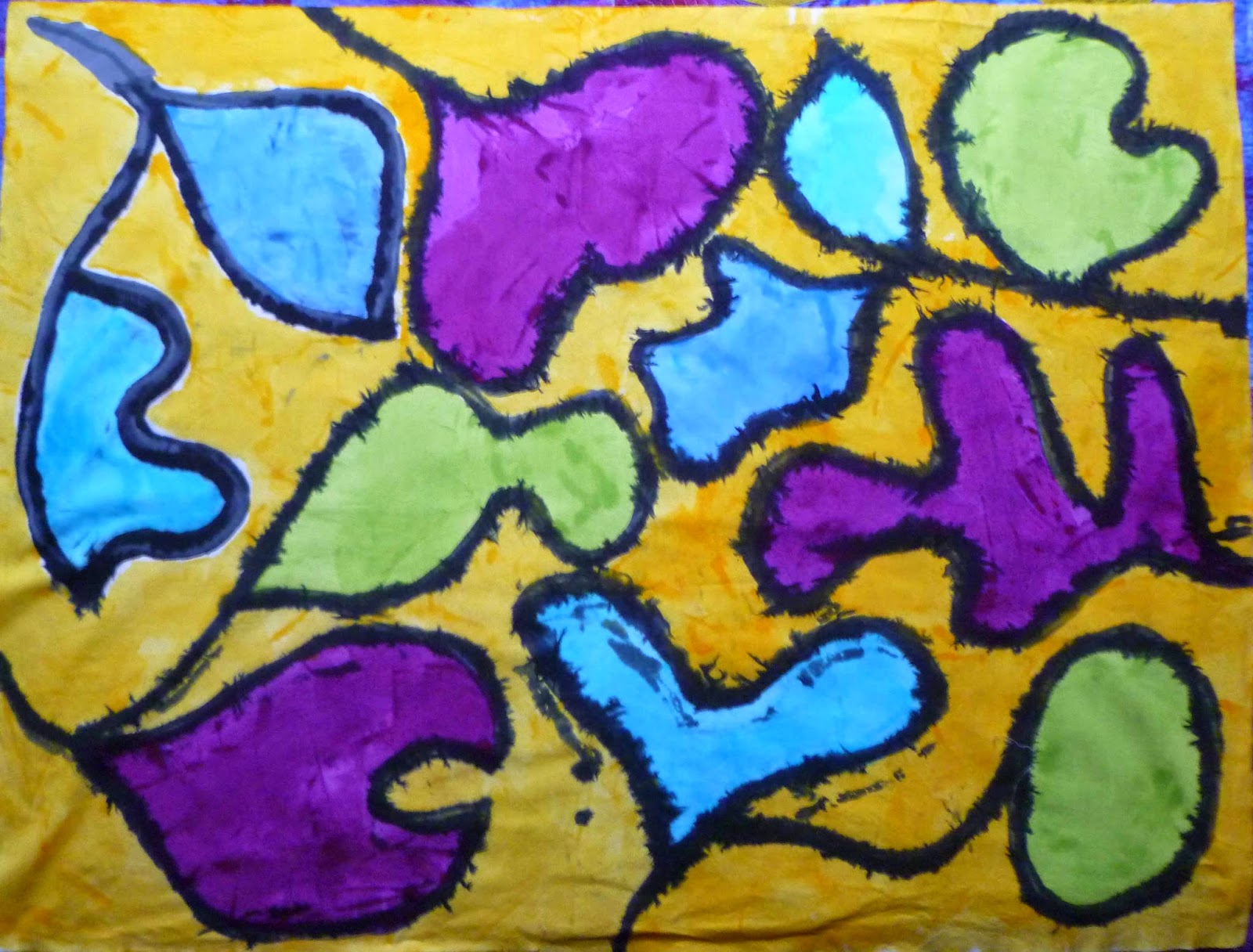 As you know there was SO MUCH dye and print paste on this I decided to take it out in the yard and hose it down as I showed in this post. I'd love to see what you come up with using this technique!!
Posted by Beth at 1:00 AM