I've been "talking" so much and showing so many lovely pictures it might have escaped your attention that I have up until now not created one single sewn quilt piece. It did to me so I set about to create my first piece. I wonder if these are called "blocks" even though they are small??? A question for another day 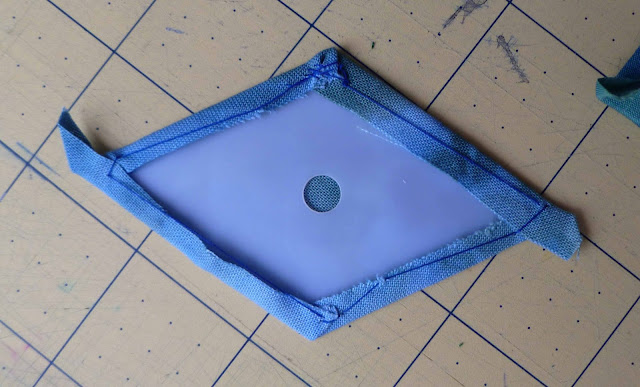 This little prepared piece looks so sweet and innocent sitting on the table but lurking behind it were A LOT of lessons.... (see how raggedy the edges look? hehe) 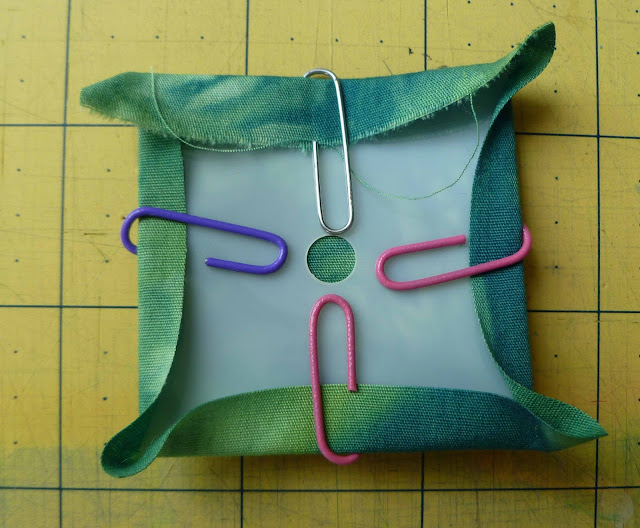 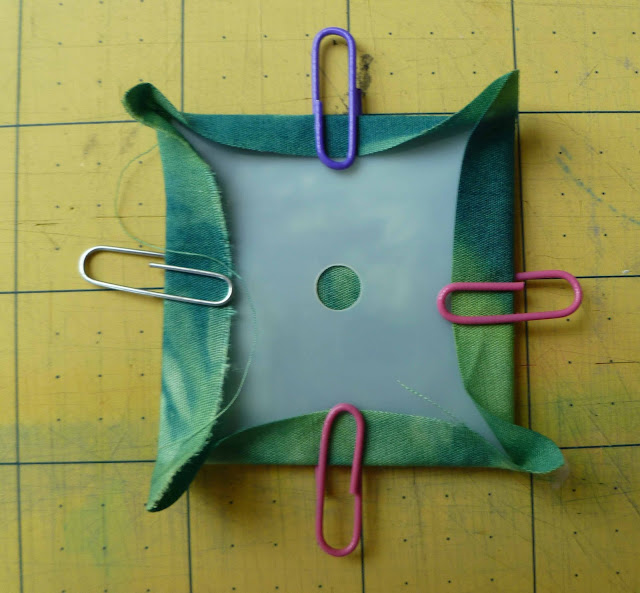 Lesson 6 - The are 2 ends to a paper clip, one longer than the other. Always have the LONG end of the paper clip on the fabric side and the short end on the plastic side facing you. Why, you ask? The short side will not have to be pushed on so far but the long end can provide a great grip helping it stay in place while sewing. I did find it easier to remove the paper clip that was between what was sewn and what I was sewing.  I found the paper clip hanging out the right side got in the way of my stitching. And now on the stitch. 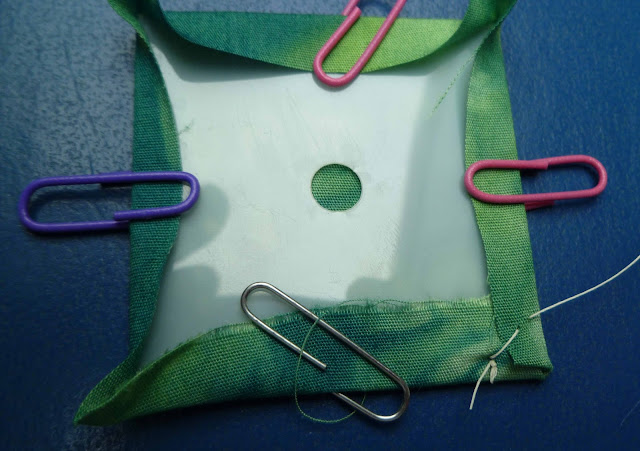 I started the tacking process on the lower right side. I took stiff thread in white (easier to thread with stiff thread and the color will not be confused with the whipstitched seams later on)  I took 2 back stitches. 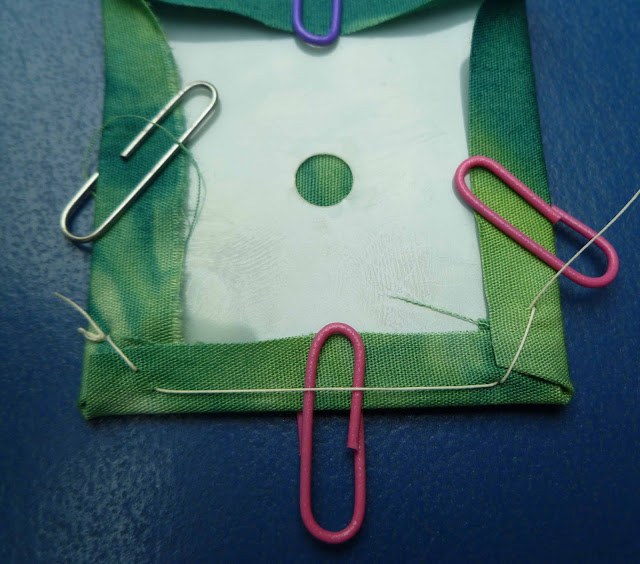 I rotated the piece clockwise and tacked the next corner with 2 back stitches. You see how the thread went over the paper clip. On this one I still sometimes caught the thread while trying to remove it but even more frustrating was the paper clip was getting in my way while I was trying to get the corner held tightly with my left thumb nail. 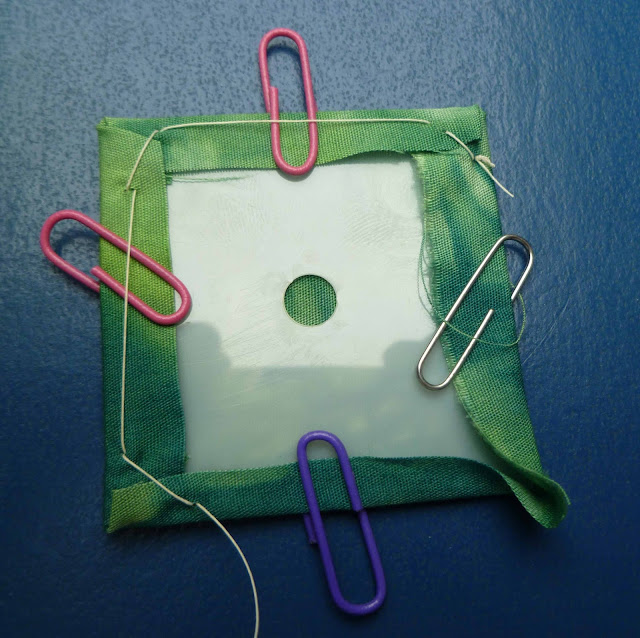 I continued around the piece until I had all four corners 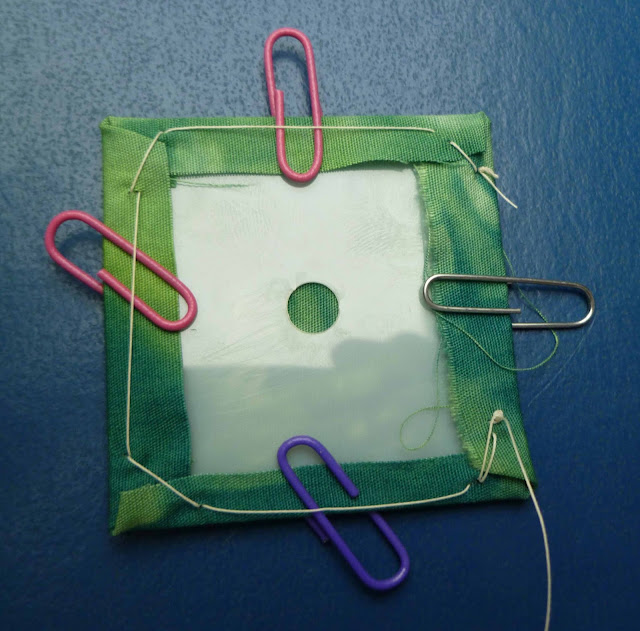 I tied off at the fourth corner. I did not stitch back to the beginning (why do it). All four corners were secured. It saved me another stitch to make and later remove and it saved me thread. 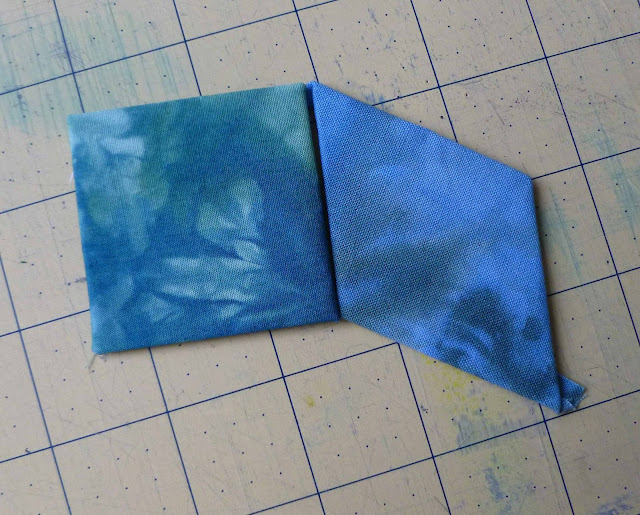 Here are the first 2 actual pieces I stitched on to the plastic piece. They look so innocent but it probably took me a half hour to do them. Later that night, while watching Netflix, I stitched a bunch of them lickity-split!! Oh no, my age is showing!!!!
Posted by Beth at 5:00 AM