As you probably surmised from my last post I am loving this batik technique so I decided to do a tutorial.

I used a purchased 19mm silk charmeuse scarf 8X54. Iron it first like I didn't. Start the electric frying pan and add soy wax - flakes not a solid chunk. I set the thermostat at about 150-160degrees F. Soy wax melts at a very low temp and washes out of fabric with a simple hot wash (more about this later). I wouldn't use nor recommend any other form of wax. 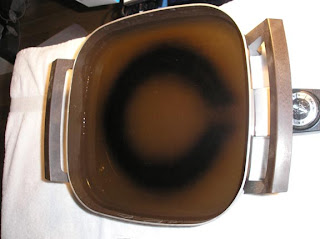 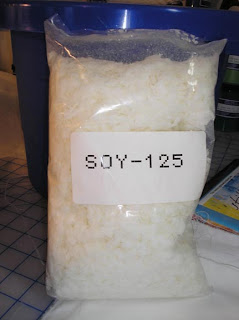 I covered my work surface (a 2'X4' home made ironing board with 6 mil poly film and a heavy old towel. Kiss the towel goodbye. 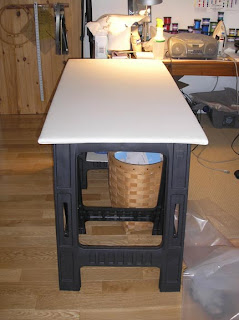 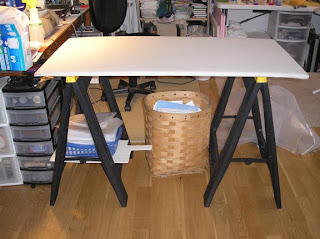 I made this ironing/silk screening/monoprinting surface out of a 2'X4' piece of 3/8" plywood from Home Depot. Cost about $8. I covered it with felt and 2 layers of warm and natural batting and a medium weight muslin fabric secured with a staple gun. I set it on collapsible horses ($12.) This surface is the BEST tool I use and I can collapse it in 30 seconds if needed.

I used a potato masher (they come in many shapes so get a variety) and set the end in the hot wax for about 30 seconds to heat the metal, shook off excess wax and applied in a pattern to the white silk. 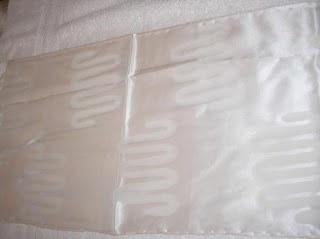 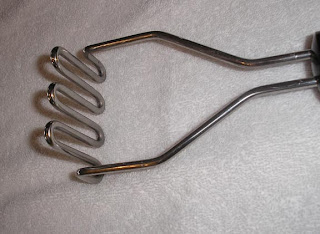 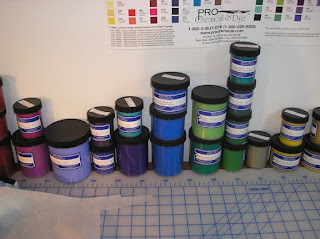 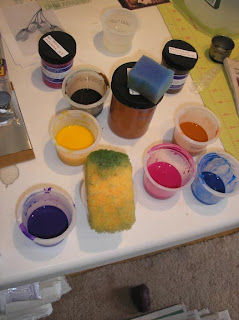 Next I used some fabric paint that I thinned with water. You just need to try it yourself, get a feel for the consistency you like best. I started with paler colors since I would be adding 3 colors on top of each other. I applied the first (for me the lightest) color using the small square of soft sponge and put the scarf on a drying rack to dry in front of a fan. 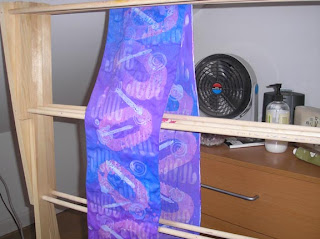 Of course I didn't take a picture of just one layer of paint because I was so excited about what I was doing that I rushed through the entire process. I did use the rack and fan for each step so just take my word for it.
Above, you can see the potato masher imprint. The first color paint was light lavender. Dry completely between applications of wax and paint. I used this rack. The next tool I used was an egg beater and a metal bit from a lamp I threw away after scavenging any interesting parts that would make shapes! 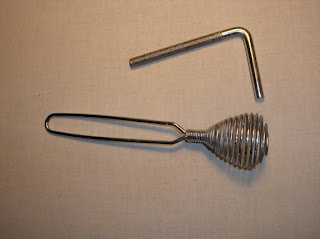 After this wax was applied, I sponged on fuchsia paint which over the lavender looked purply pink. 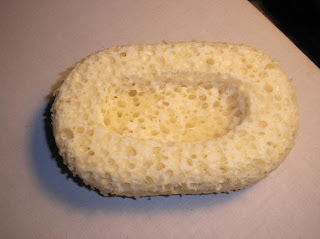 Then after this was dry I applied wax with a car washing sponge from which the center was removed. My last color was a vibrant purple alternated with a metallic dark blue (Probrite) paint. I allowed this to dry on the rack in front of the fan until it was completely dry. What I haven't mentioned was at the same time I was making this scarf, I was making another on the other side of the towel so that I could continue to work on one scarf while the other one was drying. Here are the two scarves finished and drying on the rack before wax removal. 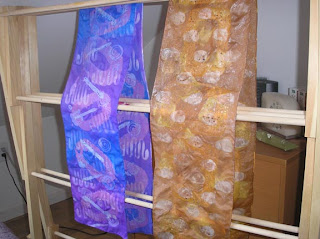 When both were dry, I took them over to my conventional ironing board, covered with newspapers, laid down the scarf, covered with more newspapers and began removing the wax from the completed projects using the iron set on cotton and a few (3-4) layers of newspaper to absorb the wax. I pressed the scarf about 3 times with clean newspapers each time to absorb as much wax as possible. This will heat set the paint. 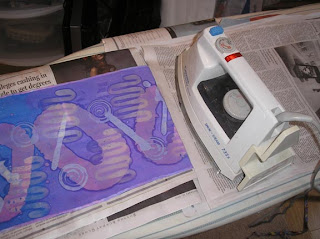 I filled a plastic basin with HOT water and a bit of synthapol (actually Prosapol) and swished it about  using soft tongs to get the last remaining bits of wax out. I let it dry on the rack and ironed. 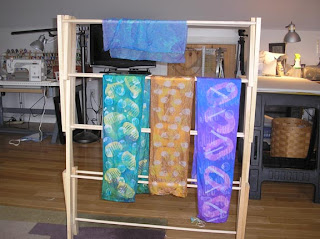 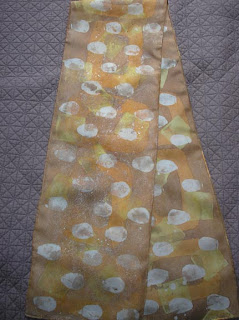 This is much better looking in real life. It started to storm here and I lost the light. Above is habotai. 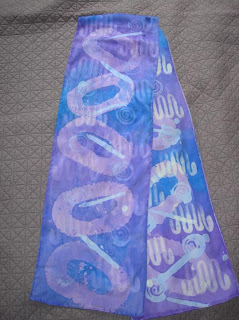 Both of these are silk charmeuse which I really love for it's softness, drape and strength. 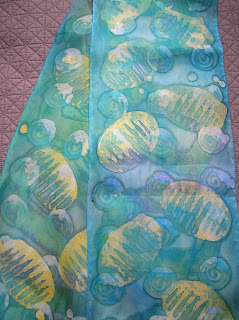 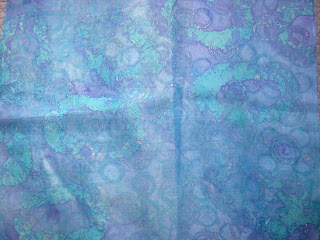 Very thin Habotai.
I hope you are as excited about trying this method of batiking as I was when my friend and fellow art quilter, Kathy Molatch , showed it to the "5" which is the name of our artist group. If you have any questions or I was unclear about something please let me know so I can make corrections or an addendum  to this tutorial.
Later...
Now that I have done batiking in my our home, I have had to clean up those towel which I will no longer use for anything but art. I tried to iron out as much wax as possible between sheets of newspaper. I took the towels to the kitchen and filled a bucket with straight hot water from the tap and dish soap. I placed the towels one at a time into the bucket and let them soak until I felt the wax had melted. I rung them out as well as possible and popped them into a full length machine wash with HOT water and detergent. They are in the dryer now back to their original softness. No waxy residue in the washer (yeah!) They are also wonderfully colored from the painting process. Back at the bucket, the wax seems to have clung to the sides of the bucket. I think some could be scraped off with a spatula or flat scrapper. I ran HOT water down the sides of the bucket and used a pot scrubber pad with dish soap to remove the last bits which were pretty substantial. I probably should have used my flat scrapper first. Next time - live and learn. At least doing this process keeps the towels out of the landfill and in my studio. The reasons I use soy wax are because it is benign to the environment (pouring out on the grass or poured down the drain after dissolution with soap), melting at such a low point and the ease with which it is removed from fiber.
Another suggestion: Get LOTS of newspapers in advance. It's amazing how many sheets of paper it takes to remove the wax. Iron silk on the silk setting but the wax can be removed by ironing with newspapers on cotton.

I have a few new pieces to show from our Saturday play date. 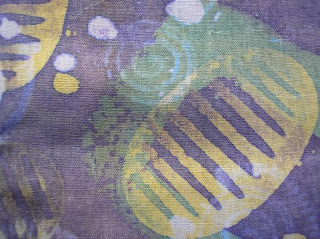 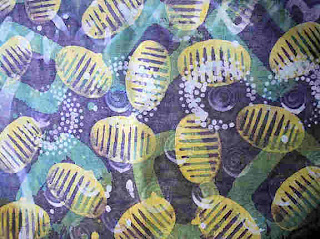 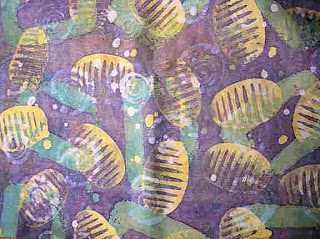 Batiked Linen. VERY absorbent. Must remember this next time I am choosing fabric. I used lots of wax, not so much paint but the color didn't completely go through to the other side. 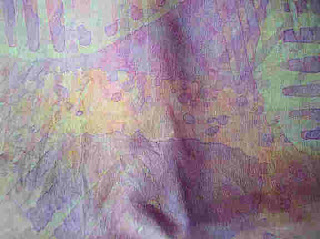 Photo "enhanced" in photoshop so that the colors were more vivid. The Habotai is NOT as pale as the images below. Actually this was a lovely piece of silk. 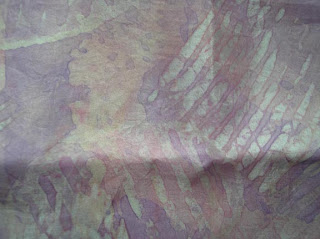 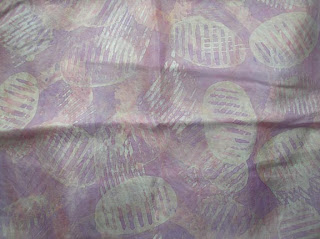 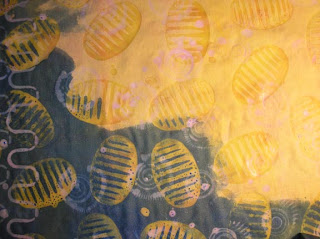 This is the photo I should have had for the tutorial. I'll see if I can add it. In this image, I have added wax with the potato masher over the yellow paint (color retained) then added blue which appeared more turquoise. 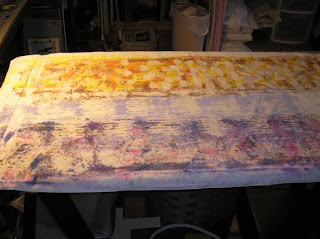 Finally, my towel is all its painted and waxed glory. It should be coming out of the dryer now into it's new incarnation.
Posted by Beth at 3:21 PM