I love playing with Judith. She is so much fun to watch when she goes on a roll with her creative ideas.
Well, I was feeling a bit guilty about not getting to the transperse dyes sooner but Judith came over a rescued me. She will be talking about how she used the materials and I will talk about how I used the materials. I added 4 teaspoons of dye powder to 1/2 cup of boiling water and stirred. I made blue, yellow, red, turquoise and black. I decided that I wanted to do sketches in dye paint so I used a sketch I did earlier for my altered books project and printed an enlarged photo of a crow. I painted over the pencil lines on my sketch with what I thought at the time was black (note to others: LABEL as you mix). I used printer paper. This formula was a bit darker than the medium recipe (3 teaspoons per 1/2 cup). I also made two sheets with just overall color. I wanted to see if the colors were transparent. When I painted red, then yellow then blue with overlapping sections, the transperse dye/paint didn't BLEND making green and purple. I wanted to see if when heated they would blend. They did and quite beautifully. On one of my crows (the one from a photo), I used 3 values of the same color dye/paint. Again I thought I was using black.Here are my results: 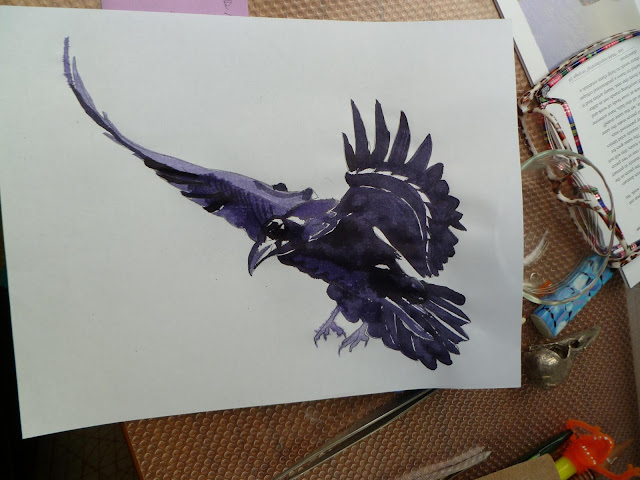 You can clearly see the 3 values of blue 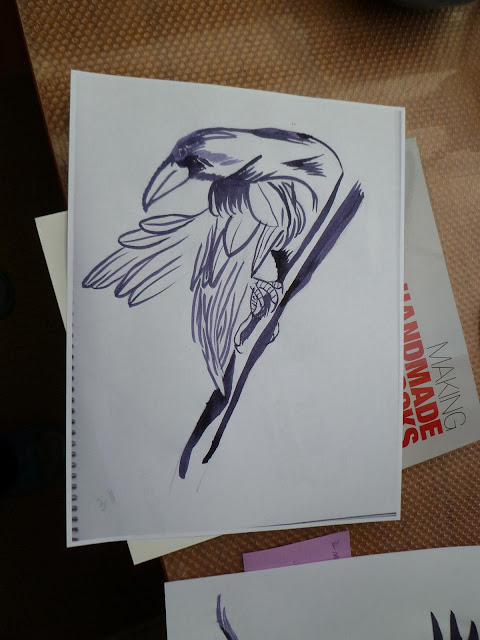 This was more sketchy 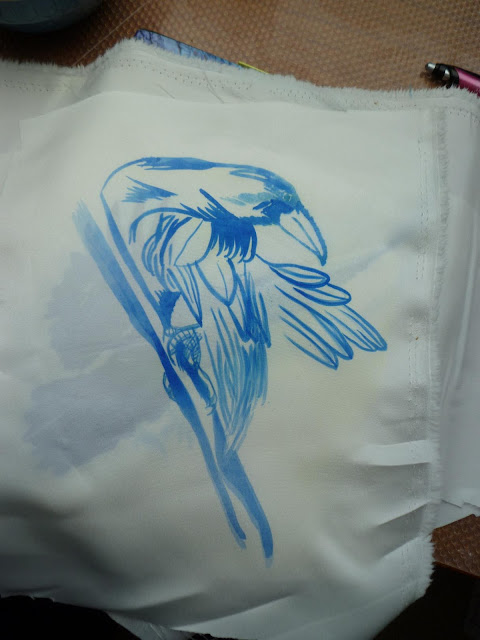 The ghost is another print under neither it showing through the fabric. Ignore the man behind the curtain. 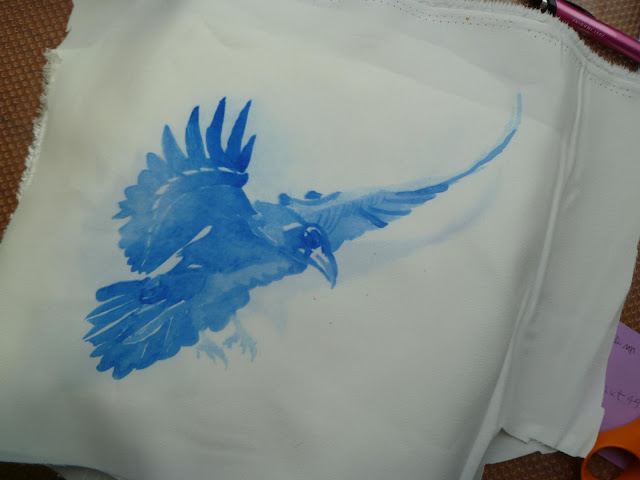 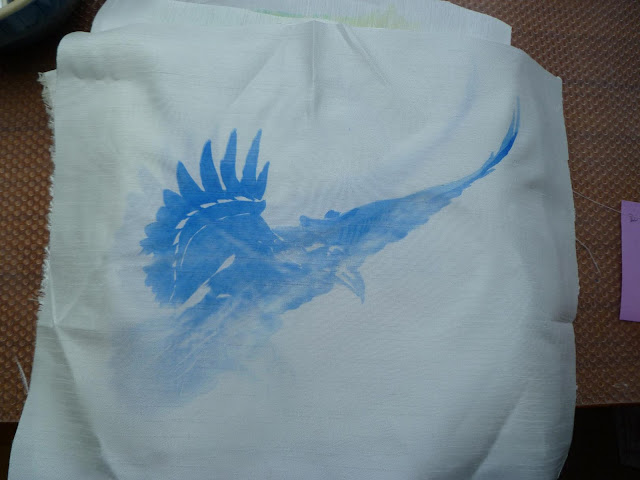 Too little heat on the bottom 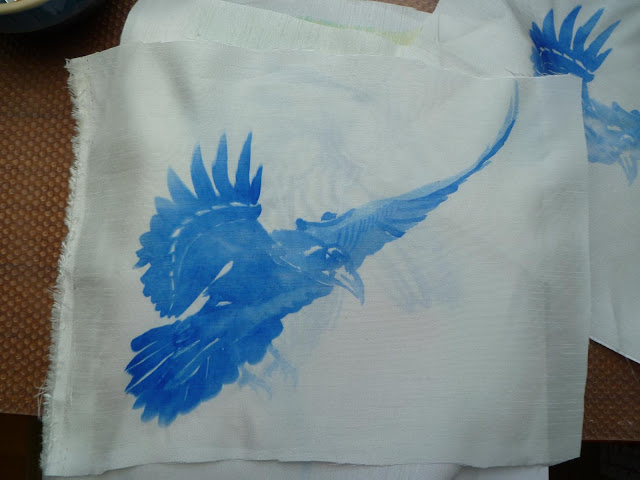 See how light I made the feet? The dye/paint was very watery and you can see the other differing values in the birds body and wings. That was what I was going for. 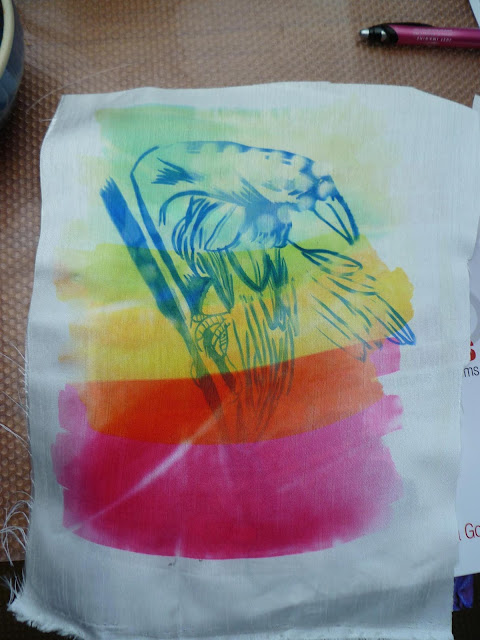 This one (above) was ruined by steam iron vent holes. That was the first print. We quickly plugged in my solid sole plate iron. You can clearly see the orange and green above. 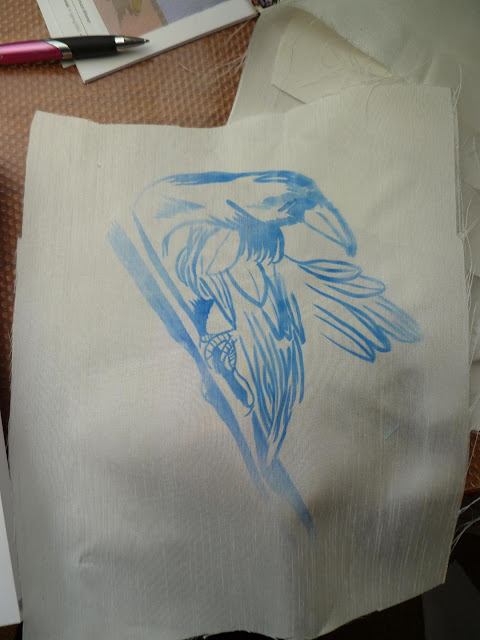 This was our set-up (below) 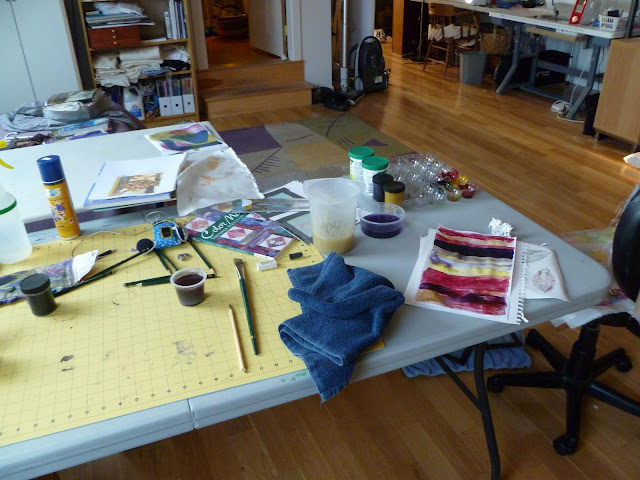 OK. This is my 2 cents.
1. These transperse dyes really smell B A D and I mean stink. The stunk up the whole kitchen during the mixing process and every time we opened a container of mixed fluid dye the smell was awful.I have a massive exhaust fan within inches of our ironing surface so there were no fumes we noticed during the ironing part but I bet we'd be choking up a storm without that fan.
2. I thought they were no big deal although I can tell you Judith had a ball. I will probably never use them again - really
3. It was messy since they were fluid however the mess washed right off easily mostly without staining anything.
4. The way I prepared and applied the dye was way easier than Judith's way - she was following direction.
5. I think there s a huge difference between transfer and transperse dyes. Mine were easy to use and I painted on copier paper and got tons (10-15) prints off each sheet.
Stay tuned for Judith's blog post coming up soon.
Posted by Beth at 5:19 PM