Yesterday was a meeting of the creativity play group. The meeting was at my house in Searsport and Judith supplied the entertainment. She readied 2 screens, one really large one about 18x24 and a smaller 9x12ish one with dried thickened Procion dyes in chartreuse. She also made a huge roasting pans worth of gelatin so we could do some gelatin monoprinting. I know my attempts at monoprinting were pretty lame but Judith had some great ideas or at least sparked some creative ideas in me. She used organza (where was my thinking caps?) and some resists then after removing the resists printed the reverse of the print from the gelatin. At first I was not impressed with the technique but after watching Judith, I was off and running with ideas for next time. I would check Judith's blog for her prints. http://quiltordye.blogspot.com/
Next we did the deconstructed screen printing. OMG what a ball. I have found a new addiction. Sorry had to stop for a chocolate break! We started  with her chartreuse screens and as the dried dye was exhausting, we pulled a different color (blue) dye across the screens.
Here are the pieces I made through Judith's generosity!! 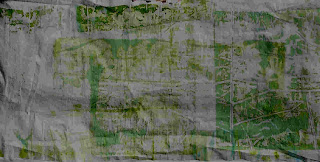 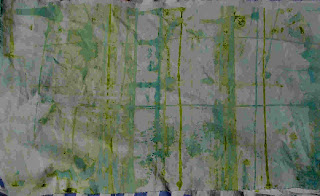 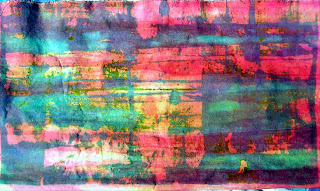 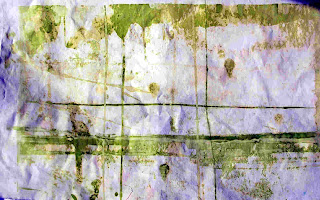 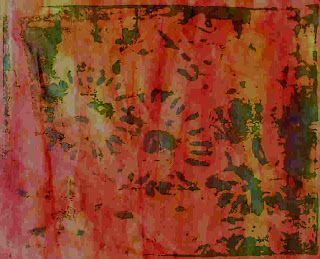 And here is the newest quilt I made called "Mishagoss" which is a Yiddish word for all mixed up and crazy.
I am not a traditional quilter but I just LOVE this little quilt made of 4" squares. Each block is free motion quilted in a matching color. LOTS of thread changes but it's the process and not the product (my new mantra). 40'x40" 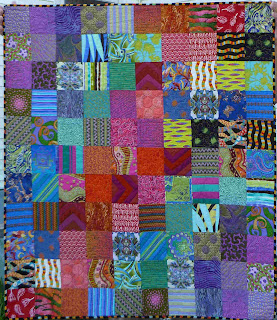